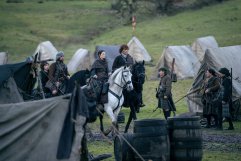 All this energy, this will, all this time devoted to safeguarding the clans. All that hope of being able to put an end to the Culloden massacre.

All these sacrifices made. In vain !

When, three days before the grim battle, Claire, Jamie and Murtagh return to Inverness on the orders of Prince Charles Stuart, megalomaniac and completely overwhelmed by the situation, they are exhausted beyond words.

The Scottish soldiers are weakened, starved, discouraged, and it is hard to imagine where they draw their strength to obey contradictory injunctions, them who left their lands and their families in order to fight with a prince who, finally, them. despise. Yet their pain is nothing compared to that of our trio, who bear the inexorable weight of knowledge.

They could leave now! Escape from this quagmire, from this pain! They could warn the friends all around, and go to the heart of the Highlands, and why not, leave the country! They could save their lives, they who have accomplished so much, who have never been unworthy! Who could blame them?

He could finally take time for himself, this admirable couple whose love has never weakened, even in the darkest of turmoil.

Yet they remain, without even asking the question, as if, and this from the beginning, this destiny was theirs, being stranded here, in the coldness of a moor that will soon be the color of blood.

Jamie is Laird more than ever, ordering, proposing, guiding, consoling. He carries the supreme charge: to try to persuade Prince Charles so badly advised by Murray and Sullivan. He in turn becomes Cassandra, custodian of essential knowledge, but unable to demonstrate it.

How not to want to scream when Charles tells him that he is his Thomas, urging him to believe in him without proof! While it is quite the opposite in truth. But Charles is so imbued with himself, so completely convinced that he is God's plan. From the start he keeps saying that Jamie is his most trusted advisor, but has he listened to him even once? 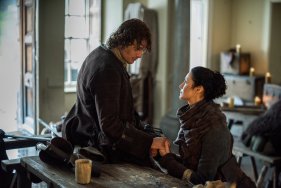 If Jamie is Laird, Claire remains a doctor. As soon as she got off her horse, she returned to Inverness in search of supplies for the battles to come. We are far from the time when she landed in this small quiet village alongside a husband found after the war of 39-40! So much has happened since then that we do not bother to be moved by this return to square one.

Moreover, barely arrived, she meets Mary and Alex Randall, both in a very bad position. One might think that it is pointless to waste precious hours accompanying a man to his death - because there is no question of saving him - when so many lives are at stake a few days away! You might think that Claire has other priorities that supplant this time spent alongside these two unconscious young people. Yet it is this return to basics that allows Claire to regain her footing.

Saving Scotland, saving the clans, saving Culloden is beyond her strength, beyond what she is able to do, the proof! She devoted two years to it, without success. On the other hand, appeasing the last moments of a sick man and guaranteeing a future for Mary, it is in her power. What a relief it must be to regain control of the weather to come! Because by saving Mary, it is the birth of Frank that she ensures just as much.

She also confronts Captain Randall. It's not just Jamie who is accountable to Black Jack! It wasn't just Jamie who suffered because of him. Claire must feel her anger at this past trauma, it's crucial.

And maybe it's important that we face it too, the readers, the spectators. It is crucial that we push ourselves to confront the madness, the excess, and perhaps what remains of humanity in the one we find hateful from the start. It is important that we are shown to be able to love his brother, to beg Claire, then to bargain with her, to marry and protect Mary. Above all capable of recognizing its darkness. Yes, it is essential that we are forced to see him as a man, however cruel he may be, and not just as a monster without emotions. 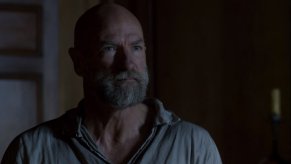 Now the two McKenzie brothers are dead, Colum poisoned by Claire - at her request of course, but all the same! -, Dougal stabbed by Jamie and Claire - for a good cause, but still! - Prince Stuart will kill thousands of men on Culloden Moor before running away like a coward to hide on the Isle of Skye. Mary is saved and Frank's birth secured. Lallybroch is also saved, and Fergus is out of danger.

What remains to be done? What is left to live?

For Jamie, the decision has been made for a while. If the Battle of Culloden is to take place, he will take part in it, his honor is at stake, his fate has been written from the start. But before that, he must save the men of his clan and put Claire to safety, as much as he knows, she is expecting a child.

“This child is all that will be left of me”. He replies. And that's what he's going to hang on to now.

As Claire had done in Inverness with Mary, Jamie is going to narrow his resolve to the essentials. He did all he could for Scotland, for the clans, for his men, without any of his many sacrifices succeeding in changing the future. But his last strength, and all the hope that remains to him, he will place in the safeguard of his love. 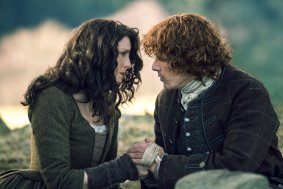 He leads Claire to the standing stones of Craigh na Dun to open the door of time on the woman he loves and their unborn child. He will stand on the other side in order to keep it closed, protecting them in any way possible for all eternity.

He will match fate and go to fight on the moor so that the curve of time is respected.

He will not suffer long to tell the truth! A few hours at most since he plans to finish it off.

But for Claire, it will be different. She will have to survive, for him, for the child, when she would like to follow him, in death if necessary. Living without him is worse than dying.

It is he, the soldier, who will fight, yet it is she who must show bravery. He knows it well.

So, with his presence, his gestures, his words, he accompanies her to the stone and carries her hand until it crosses, forever. Nothing in all of his past and future life will have required such courage. 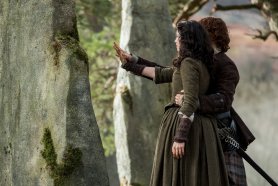 When Claire and Jamie both realize that there is nothing more that can be done to try to stop the future, Claire, the life saver, sees the assassination of the prince as the ultimate solution. . Kill a man to save thousands. To accept to bear the weight of this death, to be responsible for a murder. And Jamie, who never doubts his wife's reason - "as soon as you open your mouth, I'll believe you , " he told her after the witch trial - lets himself be convinced. Yes, killing the prince will be able to save men, and this is only a fair turn of events, because so many men have already died because of the prince's madness!

But Dougal McKenzie, a warlord relegated to the rank of subordinate, misunderstands his nephew's intentions. He also does not want to trust the one who, however, has not ceased to demonstrate his allegiance. Difficult to know what prevailed in the life of this man consumed by jealousy and the need for recognition. Exhausted, hungry, confused, and not very smart, it must be admitted, he throws his anger and his despair on this couple who have always managed to thwart their own plans. Because finally Jamie is appointed as guardian for Hamish, the next Laird of the McKenzie clan, Claire did not become the widow-heiress of Lallybroch whom he wanted to marry, he has neither wife nor child and Prince Charles does not. did not appreciate its importance. What does it have left to justify its existence?

Her fight against Jamie is the ultimate cry of despair, and her look of incomprehension as Claire joins her husband to drive the blade deeper into his heart, speaks volumes about his inability to perceive the truth about this. unusual couple. 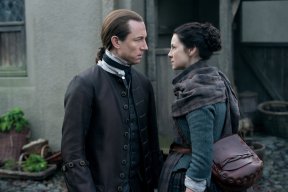 Focus on the episodes:
"The hail Mary" and "The dragonfly in amber"