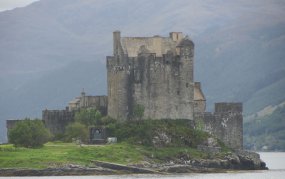 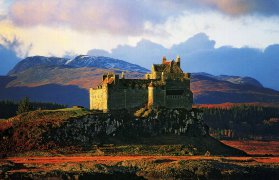 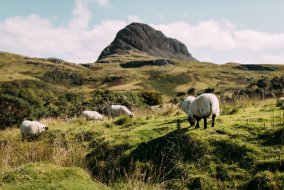 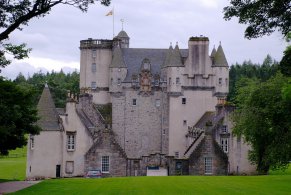 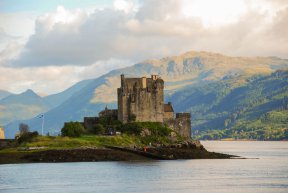 The clans were frequently at war to defend their lands and their herds, and the chiefs led the troops. They had great power and lived in fortresses, clan headquarters. The chiefs owed their members to administer the territory well, and the members owed the chiefs to take up arms when the latter thought it fit.

If the members of the clan paid them contributions, it was in kind, and sometimes abundantly, which allowed the chiefs the exercise of an exuberant hospitality:

For example, around 1680, MacLeod, chief of the clan of the same name, received from all the lands where his authority was exercised, 9,000 chickens a year and from the island of Skye alone, more than 3,000 kilograms of butter. 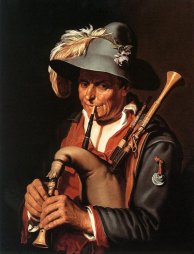 Other families, called septs, (probably the word 'sect' that has changed over time) bearing other names, recognized some leaders and thus became part of their clan.

For example, the Burns family, which was very small and had an uncertain inheritance, had gained the legitimacy and protection of the Campbell Clan who absorbed it.

Each Scottish clan had traditionally a number of septs, each with its own surname.

The septs were allowed to wear the clan tartans to which they belong, though this was not an obligation. 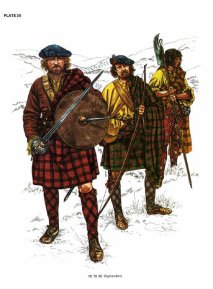 The Sgian Dubh (pronounced skin dou) means dark blade in Gaelic and refers to the small knife with a single sharp wire.

Originally used to eat and prepare fruits, meat, cut bread and cheese, as well as for any other daily use such as cutting materials and protecting oneself, it is today worn as an element of traditional Scottish attire, slipped at the bottom, leaving visible only the upper part to the guard.

Two-handed swords were already used by European fighters before the 15th century. The Scottish type of this weapon, characterized by a four-lobed end and a fully open guard, developed during the following century. Swords with such handles are rare, but are depicted on Western Highland tombs. They are known as Claymores (Gaelic Great Sword). The name is sometimes used for the shorter spears that succeeded them, which could be more properly described as basket-handle swords.

This horn is made of cow horn, heated so that the man who made it can flatten it, then decorated with a combination of Celtic and Renaissance motifs, as found on German and Dutch powder horns. .

The shape of the handle of these steel pistols, in horns of rams, is typical of the time and the region. The butt and the body are damascened with silver motifs. These pistols were those of the chiefs of the 15 and 45. The man of the rank could not hope to possess so beautiful.

The targe, or shield, is about 35cm in diameter, and consists of two layers of oak wood covered with cowhide. On the back is a strap for the arm and a handle. The surface is decorated with nails and copper plates, as functional as complementary with the shape taken by the repousse leather. In the center is a copper bump, sometimes embellished with an iron spike. This targe dates from 1715, and its decorations are silver.

The Dirk is a Scottish weapon that has evolved from a European predecessor. It is a thrust weapon, worn on the belt in a leather sheath out of the battles, and in the hand holding the targe in combat. The Dirks of the seventeenth century have reduced guards but very large and flattened knobs. The guard is usually wood, more rarely bronze or copper, and is decorated with intertwined curves. After the 45, the Dirk fell into disrepair and became an element of the traditional costume, with balancing and climbing Cairngorm stone.

Round flat-surface pins appear for the first time in Europe in the 13th century. The silver or copper brooches worn by Highland women on the chest to hold their plaids are their direct descendants. The engraved decorations of those of the seventeenth century consist of stylized animals, plant shapes and round entwined.

The purse, called 'sporran', worn with the belt plaid, and later with the kilt, was a fine leather bag lined at the top with leather straps and hung at the waist by the waistband. This purse, and its posterior derivatives reinforced with copper at the top, are versions adapted to the materials of the Highlands scholarships of the Middle Ages. Copper reinforcements appear around 1700.

The members of the Scottish clans were also distinguished by their traditional outfits.

It is from the fifteenth century that Scottish texts mention clothing with tiles or stripes. Travel reports and portraits from the next two centuries tell us a lot about Highlander clothing -plaids, jackets and trousers in tartan-while the traditional kilt evolved to be what we now know. The portraits show us that the tartans were usually worn and that the same person could wear several colors.

After the defeat of Culloden in 1946, the parliament banned the wearing of tartan, for the close relationship between 'the costume of the Higlandes' and the warlike spirit of the men carrying the weapons had become too blatant. This prohibition applied to all except the forces of 'his Gracious Majesty'.

This law was repealed in 1782, however, even if traditional tarting and costumes are again worn by the Scots, they are no longer necessarily representative of membership of a particular clan. 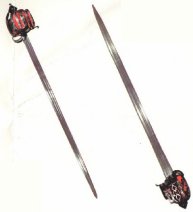 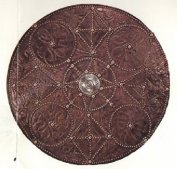 The clan leaders had a positive cultural influence in keeping the bards singing the praises of the clan, the harpists and the bagpipes.

In this context, members of the clans began to emigrate massively to America (others entering the British army in large numbers or joining the cities), especially since the former chiefs became landowners in all capitalist greed, evacuated their lands to develop the raising of large sheep and provide hunting areas for the wealthy English.

While clans often opposed the Scottish kings who wanted to turn them into feudal lordships to control them, they also clashed with each other, as it was not uncommon for two clans to claim the same territory. Conflicts over the possession of the territories were added to those related to the support that the clans granted or not to the kings of Scotland, royalists or their opponents during the Civil War of the seventeenth century, the Stuarts or England in the eighteenth century (and religious differences, more or less motivated by politics, also intervened).

In the seventeenth century, because of the English influence, the obligation to defend the clan chief by arms (against the other clans) was replaced by the duty to pay him a kind of tax or rent, while the The land, which had hitherto served as a reward in exchange for loyal military services, was gradually transformed into a commodity that became possible to buy, sell and inherit.

But until the eighteenth century, in the Highlands and Islands, the spirit of the clan system was maintained. A good number of clans rose again to support the Pretender Charles-Edward Stuart (Scottish by his family) in his attempt to regain the throne of England in 1745, but the repression that followed the defeat of Culloden crushed the old customs and institutions (the wearing of arms and kilt and the practice of bagpipes were forbidden, the use of Gaelic was discouraged, the Act on Hereditary Jurisdictions put an end to the feudal authority of chiefs).

It is said that only Alastair Macdonell of Glengarry (1771-1828) remained faithful to ancient values.

A practice formerly prevalent among the clans of Scotland was the theft of cattle, which had various meanings:

Sometimes it was simply an appropriation of animals taken in the Lowlands or in one of the few economically rich areas of the Highlands (Moray or Angus), to which the Highlanders claimed the right of plunder, according to traditions as old as nebulae.

The theft of cattle could also be the conclusion of a victorious expedition on the territory of an enemy clan or the specialty of certain clans (MacFarlane, Maclan, Cameron, Appin's Stewart, Glen Orchy's Campbell) or 'broken men '(People no longer connected to their original clan), that was the only resource.

Similarly, the robbery of a small herd of cattle was one of the unavoidable trials that a young clan leader had to perform in order to prove his worth and gain the prestige inherent in his aspirations. In most cases, his animals were retrieved by a gang of young men from the despoiled clan, thus also acquiring their warrior status, without the need to trigger inter-clan fighting.

In some cases, theft could be accompanied by real provocations with sometimes dramatic consequences (punitive expeditions), although in general, the bloody issues were rare.

The clans were characterized by the collective possession of a territory administered by their chief for the benefit of all members (thus the MacDonalds were settled in various places, including the Isle of Islay and the Isle of Skye, the Macleans in the The islands of Mull, Tiree and Coll, the Mackays in Sutherland (North-West), the Camerons in Lochaber (Ben Nevis region) and the Campbells in Argyll (South West Highlands).

Chiefs and their officers took charge of the annual redistribution of land.

Each of the clans sought self-sufficiency on their own land by raising livestock and growing oats and barley (which they made whiskey). There were few craftsmen, because each farmer and his family did most of the work themselves on fabrics, leather and iron.

The peasants, on the other hand, practiced a transhumance of summer made necessary by the insufficiency of the grass around the winter villages. As a result of these movements, sometimes far removed from the winter village (up to about thirty kilometers), the animals were, as a rule, abandoned to themselves in the hills.

The clan system also existed outside the Highlands.

Thus the Douglas clan controlled part of the Lowlands (or 'lowlands', which refers to parts of Scotland that do not belong to the Highlands although not constituting an official geographical area of ​​the country.).

The word 'clan' means 'offspring, buds, children, family' and the idea behind clan life was the origin of all members from a common ancestor who was, in fact, endowed of great prestige. This is how all members of the clan had the same name.

In the Highlands, this name began with the prefix 'Mac' ('son of' in Gaelic), followed by the name of the common ancestor (eg MacDonald, MacDougall, MacLeod, etc.); but other Gaelic names also existed, such as Cameron (which means 'crooked nose') or Campbell (which means 'twisted mouth'). In the Highlands, there were also clans of Norman origin, such as Grant and Sinclair.

On the other hand, if all members of the clan had the same family name, traditionally only the leader claimed that name. Thus, the leader of the MacFarlane clan was called 'MacFarlane', without reference to his first name, and without using the politeness form 'sir'; the men of clan quality were called by their full name, according to the usual conventions. On the other hand, the minor members were called by their only given name, to which their place of residence was attached, for example 'Iain de Tallisker'

The Scottish Clan System is a society in which the community takes precedence over individuals who are fully integrated with it (it is a typical Gaelic system that also existed in Ireland, of which a good number of Scots originated).

The clan member who refused to risk his life to protect his leader was considered a traitor, and the contempt for him was his most cruel punishment. There were also situations where a clan member could be tried and punished for an offense instead of another member of the clan who tried to evade it.

The clans were represented by a tartan (colors and special designs on traditional clothing), a motto (the motto of the MacDonald clan is 'Per mare per terras', 'On the sea and in the land'), and a plant insignia, in a sense often magic, worn on a spade or cap.