from a father from New Mexico and an English mother from Yorkshire.

- In 1977, she married Doug Watkins. They have three children, including fantasy author Sam Sykes (1984).

- From 1980 to 1992, Diana Gabaldon was professor of ecology at the Environmental Science Center at the University of Arizona before devoting herself to full-time fictional creation.

His first writing attempts were posted on the CompuServe Writing Forum. Positive feedback from other forum members persuaded her to finish and publish her first novel 'The Thistle and the Tartan'.

For her first writing, Diana wanted to write a historical novel. One day, while watching the television series 'Doctor Who', she was impressed by the character of a young Scotsman of 1745. The image of the young man in kilts marked her, and she decided to situate her novel in the Eighteenth century Scotland and to name his male character Jamie from the character of 'Doctor Who'.

'The Thistle and the Tartan', the first volume of the series 'Outlander' (also called 'The Stone Circle'), is published in 1991. Gabaldon knows a huge success with the saga, which has more than twenty million readers worldwide and featured in a television series premiered on August 9, 2014. She was the recipient of the People's Choice Award for Best Drama Series.

In 2010, Gabaldon adapted the first third of 'Outlander' in the graphic novel 'The Exile: An Outlander Graphic Novel', illustrated by Hoang Nguyen.

The saga 'Lord John' (1998-2011) is derived from 'Outlander' and takes again the adventures of one of the secondary characters appearing in several volumes. It is composed of five novels and three novels.

Diana Gabaldon lives in Scottsdale, Arizona, with her husband.

1999  Interview with Diana Gabaldon after the release of the bookanuary

Diana stands up for Frank

2005 - Diana responds, with the outspokenness we know her, to critics of Frank Randall.

2002 Discussion after the book

Discussion after the autumn drums

2009 - About the 7th opus: The echo of distant hearts
By Rebecca Bain 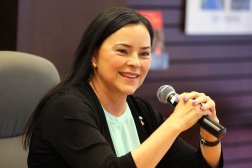 Jamie or the rule of three

2018 - The underside of the Outlander saga
By Fasseur Barbara

Sam is Jamie, by Diana Gabaldon

Interview about the 8th opus

Interview about the 8th opus

2020 - Diana Gabaldon responds to fans who wonder about body odor she often refers to throughout her saga.

She also talks about layering the clothes regularly mentioned.

Why is volume 9 long overdue?

2021 - All fans are waiting for the ninth volume of Diana Gabaldon's saga. Why is it taking so long? Here are some food for thought written by Courtney Williams for the outlanderbts website, commented on by Diana herself.

Many readers dislike Brianna in the first volumes ... As she had already done with Frank Randall, Diana takes the time to defend her character by recalling the past and present context.

2020 - Always with patience and kindness, Diana responds year after year to questions from fans about the ghost of Inverness. Does she know who he really is? Does he have a leading role to play in the story? Are the fans close to the truth? The author responds in detail without ever revealing more than necessary.

2020 - Discussions about the exact moment when our young lovebirds fall in love, fuse on social networks without anyone being able to prove that his theory is correct. So why not ask the author directly?

2013: Diana confides in Barbara Regan about her relationship to reading and reacts to some recurring questions from her readers.