Here’s When Jamie & Claire Fell In Love, According 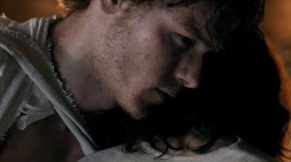 Author Diana Gabaldon has repeatedly said that the Outlander books are not romance novels since they go beyond — way, way beyond — the courtship period. But that doesn't mean fans aren't still fascinated by the early days of Jamie and Claire's love story.

The Dipp previously asked some of the biggest Outlander fans when they thought Jamie fell in love with Claire and when Claire fell in love with Jamie. Whether you first watched (and rewatched) the start of Jamie and Claire's love story in Starz's Outlander Season 1 or read (and reread) about it in the book Outlander, you may think the topic continues to be up for debate. But I wanted the definitive answer, so I went straight to the source and asked the Outlander author to settle this once and for all.

When it comes to when Jamie and Claire first fell in love, the consensus from the fandom is that Jamie fell before Claire did. But fans were divided on just when that was. Was it love at first sight when she fixed his shoulder? When he fell from his horse? At Castle Leoch when she cried in his arms? Or even later — though, not much later since their entire courtship (if you can even call it that) lasted only six weeks — during their wedding night?

As Gabaldon points out over the phone, Jamie "was attracted to her immediately." In the book, he eventually — very swoon-worthily — tells her that he married her "because I wanted you. ... More than I ever wanted anything in my life."

But though he was interested in her during their first interaction when she mended his shoulder, Gabaldon says the actual falling in love came when they got to Castle Leoch. "He fell in love when she broke down and wept in his arms and let him comfort her," the author says.

Jamie falling first was inevitable since he didn't have the complications of having a secret double life and spouse in the future like Claire. With Claire choosing Jamie, "She is leaving not only Frank but everything that she knows — an entire culture," Gabaldon says. "She's abandoning a huge chunk of her life, in fact, pretty much everything but her body in order to stay with him."

As for when Claire fell in love, well that is a bit more open to interpretation. Some fans I spoke to thought Claire fell during her first time at Castle Leoch (though not on her first day there, like Jamie). Others thought on their wedding night. Or after Jamie saved her from Fort William. But even though Claire in the book tells Geillis that she loves Jamie when they are being held prisoner ahead of their witch trial, Gabaldon says it's not until after the witch trial that Claire realizes the true scope of her feelings.

"I don't think Claire realized her emotional dependency on Jamie until he took her back to the stones with the intent of sending her back to Frank," Gabaldon says. "In the book, she sat there all day trying to make up her mind and thinking, 'I just don't know.' And then she stands up and walks toward the stone haltingly. And then, suddenly she rolls around and runs back down the hill like her tail's on fire."

Claire's "psychosomatic response" where her body took over to give her heart what she wants is "when she knows she [is] in love with him," Gabaldon says. "She needs him." 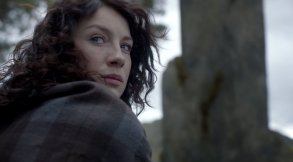 For Gabaldon, the theme of needing is what ultimately solidifies their bond. "There's this thread that goes throughout the books that love is actually based on need. Not that I need someone to love me; it's that the person who is loved needs to be needed," Gabaldon says. "So there's this sense of dependence. They save each other's lives routinely back and forth. But they depend on each other emotionally as well to a very great extent."

So Gabaldon has settled how it all began, but what remains in store for the lovers? We asked The Dipp subscribers to submit their burning questions for the author and reader Cathryn has asked the million dollar question: "Does Jamie find Claire in the end like he promised her? Will they be together forever?"

As that part has yet to be written, Gabaldon was far less straightforward in her reply. "Well, we won't know 'cause none of us is going to live that long," the author cagily says. "But I'd say the odds favor it."