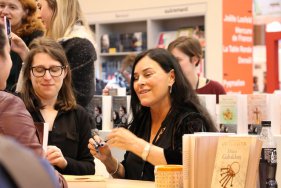 Outlander, the original title of the saga, is a fiction that brings together all at once, historical facts, adventure, romance and kilts. We follow Claire Elizabeth Beauchamp's dual destiny between two eras and two husbands. At the end of the Second World War, she finds her husband Frank Randall in Scotland. Only, during a ride, inexplicably attracted to a menhir, she finds herself transported through time. At the heart of the fight between Highlanders and English in 1743, she met the beautiful Jamie Fraser.

But that, all the audience already knows it. Whether through the pages of the imposing volumes, or the three seasons of the Netflix series, the mostly female audience is present to meet the creator of this universe so rich in details and so just in references. The author takes the time to dissect her motivations. 'I wanted to tell what it's like to be married for more than 50 years, to understand how a couple can last by exploring everyday life, the evolution of feelings, and the life of two after so many years' -t it.

To the astonishment of her readers, the author confirms working alone and without a pre-established plan. She writes little by little, scene by scene to gradually build her story by letting live her universe and her characters. This gives rise to volumes that are very rich in the various descriptions, citing for example the historical events, but also the medical techniques used by Claire as a nurse. And yet, even for research, it is she who does everything.

'It's like going to the supermarket yourself instead of giving someone else the shopping list.' 'We're coming back with lots of extras we would not have thought of. it's the same, and by taking the time to do it myself, I'm discovering things that I would never have studied without it, and this work allows me to make the story more detailed, much better. knowledge, I create myself much less barriers and I constantly nourish my inspiration.

And it's the least we can say, Diana Gabaldon has fixed few barriers. She does not hesitate to address difficult topics, but always well documented. One of the recurring themes is unquestionably the condition of women throughout the centuries, and the issues of rape and consent it raises. Unquestionably, Claire becomes a figure of independence and rebellion. 'After all, the conflict in all its forms has always given the writers some grist.'

And this is also the starting point of his cycle of the Stone Circle. 'As a researcher, I already knew how to use a library, so for my first novel, a historical fiction based on existing material was the kind that seemed most accessible to me.' Diana Gabaldon has indeed started her first story in secret at age 35. 'Mozart died at age 35. I did not want to die without doing what I thought I was destined for.'

To do so, after days in the library, she listed all the periods of conflict that seemed to her to be of interest. At the same time, she is stuck by the replay of an episode of Dr. Who. We meet one of the recurrent companions of the Doctor, who is none other than a young Scotsman from the year 1745, wearing his kilt. His name ? Jamie MacCrimmon, played by the actor Frazer Hines (but that Diana will not learn it until years later ...).

And Claire in all this? She arrived three days after the start of writing, to add a little spice, a bit of conflict. 'After three days telling the story of the Scottish kilt farm, I decided to add a When I imagined her in the cottage with Dougall and the others, I knew she would not be willing to cooperate, so as to make her a nurse, I wondered as a woman what I would have liked to practice as a profession, without encumbering myself with technology and that's how I attributed to Claire a medical profession, nothing better to survive 'fun the author.

And when asked if she intends to continue writing, Diana Gabaldon answer that there are still many more stories to tell. No doubt, the kilt factor still has good days ahead of him ...

Diana Gabaldon
and the 'kilt-factor'