Diana tells us about the ghost of Inverness 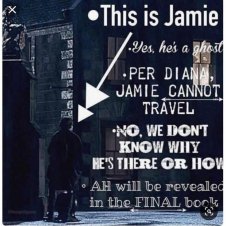 Diana Gabaldon has been answering readers' various questions about her outrageously popular Outlander series for decades, but the one thing fans bring up time and time again is Jamie Fraser's ghost.

You’d think the author, who responded to my request to chat while she was out of town visiting her daughter, would be sick of the topic, but great news: that couldn't be further from the truth. Gabaldon is more than happy to talk about the mysterious, mythical ghost she created. Even if she has been talking about it for over 25 years.

We decided we'd connect when she returned home to Scottsdale, Ariz., and when I told her I'd be calling her from the East Coast, she graciously explained the daylight saving rules of her home state. "Arizona doesn't do Daylight Savings, so the rest of the country leaps to and fro around us twice a year," she wrote in an email.

She even provided her landline in case her cell didn't work. "I just got a new phone and haven't made any calls yet,” she said.

Her attention to detail and thoughtful, provisional planning is nothing that will surprise any Outlander fan. And her willingness to talk about the book and the characters she’s created won’t come as a shock, either.

Gabaldon is an open book when it comes to her book; she’s highly engaged with her fervent fan base. She uses Twitter and Facebook and even lists her email address on the latter; attends fan events; keeps her website updated; and hangs out on TheLitForum.com, which she notes she’s been a member of even before she wrote Outlander.

Common sense would tell you that there was no way Gabaldon was going to divulge anything that would spoil her Outlander ending nearly 30 years in the making, but she was able to elaborate on the few clues she’s already given fans, and in the process, she even provides some new food for thought.

1. She Didn't Know The Identity Of The Ghost … At First

Gabaldon has previously shared with fans that she didn't know Jamie was the ghost when she first wrote about the apparition. "Just like everyone else, I was thinking, 'Who's that ghost? What is he doing here?'" she tells me with a laugh.

(Also, just a reminder: Gabaldon has previously revealed that the ghost that Frank Randall encountered in 1946 Inverness, Scotland is, indeed, Jamie Fraser, and she’s confirmed that she’ll explain how Jamie's ghost fits into the bigger story in the tenth and final Outlander book. Oh, and she confirmed that Jamie can't time travel.)

The initial intention of the ghost, she says, was to add some mystery to those opening, pre-time travel pages of Outlander.

Figuring, as she did, that "ghosts are all over the place" in the Highlands ("that's a very haunted landscape in many, many regards,” she says), Gabaldon added one to her story to create some conflict.

After seeing the ghost watch Claire through the window, Frank is inspired to ask Claire about any potential infidelity that might have happened during their years apart during World Word II. It's ironic, of course, because Claire didn't cheat on Frank with a Scotsman in the 20th century, but she does marry a Scotsman — while still married to Frank — in the 18th. "If you have a triangle, the first thing you wonder is how is this going to work out," Gabaldon says of Claire, Frank, and Jamie.

Though Gabaldon had no identity for that Scotsman "the minute when I wrote the scene," as her first novel continued to take shape, she says "it became blindingly obvious in short order who that was" — James Alexander Malcolm MacKenzie Fraser.

2. Claire Never Makes The Connection Between The Ghost & Jamie 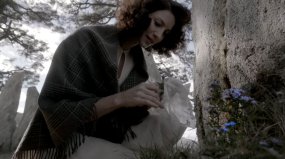 Gabaldon patiently takes the time to answer fan queries — even as she's busy writing her novels — but there is one question she is a little tired of: "Why doesn't Claire recognize Jamie when she goes back to the 18th century?"

She’s clarified time and time again that only Frank saw that "big chap" of a ghost.

"We only hear Frank's description of him as a Highlander in full kit," she says. "But after that, they both dropped the conversation."

It wouldn't make sense for Claire to confront Jamie about being a ghost, seeing as ... well: "She never saw the ghost!" Gabaldon continues: "Why would [Claire] say, 'Oh, you know what? Six months ago, my late husband Frank had an eerie brush with a ghost in Highland garb, was that you?'"

So, consider this put to bed: Claire doesn't recognize Jamie in the 18th century because she's never seen him before. The end!

3. Jamie's Dreams Might Have Something To Do With The Ghost

When I ask Gabaldon about any potential connections between what she refers to as Jamie's "semi-clairvoyant dreams" and his ghost spirit, she doesn’t hold back. "For Jamie, perhaps death is just a continuation of his dream," the author tells me.

But she quickly adds, "Perhaps. I'm not saying that's true … [but] his dreams probably are part of the part of him that would be a ghost eventually." That's because she hints that Jamie's ghostly soul contains his personality, which includes his ability to see into the future.

"The soul does survive death," she says. Which leads us to...

4. Jamie Could Have "Unfinished Business"

A common occurrence in ghost stories is that the spirit has some final business to attend to on Earth before they can be at peace in the afterlife. Gabaldon hints that Ghost Jamie could have some such "unfinished business,” but she keeps this clue as absolutely cryptic as possible.

This is how Gabaldon describes a possible reason that Jamie stays on Earth as a ghost: "Presumably, he's been relieved of the worst stuff by the process of dying" — the "worst stuff" means, basically, that his mortal sins have been forgiven as he journeys to become immortal.

So does he have unfinished business or not?! And what is it? If he does, it surely will have to do with Claire. Right??

5. There Are Clues In The Books About The Ghost — But Don't Expect Her To Explain Them 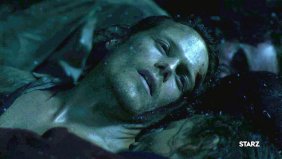 In Dragonfly in Amber, Jamie says he'd "endure two hundred years of purgatory" to find Claire again. When I ask Gabaldon if this is any indication of where she'll end the Outlander story, she replies, "I couldn't tell you that."

Same goes for his age. She revealed to The Outlander Podcast that Jamie's ghost is 25 years old and many fans have theorized his age may have something to do with the Battle of Culloden, since Jamie was around 25 during that fight.

Gabaldon tells me she won't explain what his age could mean, but she doesn't discourage fans from reading into this fact. "I mean, that is the age that he is, but it's fine with me if they'd like to contemplate why," she says.

As for future clues, Gabaldon has tweeted that the ghost will not have any additional appearances until the end of the book series. And she isn't willing to reveal to The Dipp if there will be any more ghost clues in her forthcoming books — Go Tell The Bees That I Am Gone and the untitled tenth book.

But, she knows that if she does put any ghost references in, her devoted fans "aren't likely to miss anything." You bet we won’t.

6. She Hasn't Seen Any Fan Theories That Have Gotten It Right

Speaking of those fan theories, Gabaldon isn’t shy about firing up her Twitter account to debunk them, like when she tweeted that Jamie isn't reincarnated. Another time, after the UK's Express picked up Reddit user Asmortica’s theory that the ghost had something to do with Claire being born in the 18th century, Gabaldon wrote on Twitter that "not a word" of it was true.

I ask her if she has seen any theories about Jamie's ghost that are close to what she has envisioned for the end. Her reply? A simple, "Not really."

She says she has read her fair share of WAGs ("wild ass guesses") on TheLitForum and whenever new material does come out, she says devotees will "start trying to weave it into a cobweb that doesn't yet exist."

But don't let her answer discourage you; Gabaldon admits she's acutely aware of the effect her writing, and the pattern of her story, has on fans. "It's like dropping a very large boulder into a pond. You get a lot of coruscating ripples and standing waves and stuff like that. Once the stone has been dropped, it doesn't cease having any effect," she says.

She drops figurative, literary boulders in her books for herself, but, "I do certainly realize what the effect would be" on readers. Also, she's wise enough to know that any stones or boulders she drops outside of her books will make fans double down on theories, to which she says, "More power to them!"

7. The Ghost Story Will Be Resolved In An Epilogue

Gabaldon didn't specifically say the tenth book will have an epilogue, like A Breath of Snow and Ashes (which had two), but she makes it clear that the ghost explanation will be a final thought after the main story has wrapped up.

Echoing a tweet of hers from 2018, she tells me, "I can't say [the final ghost scene is] not part of the plot of the book, but it's not a linear part of what came before." She further clarifies, "I'm not saying it's not important, but it doesn't really seem to affect the plot as it goes along."

As for the main ending? Gabaldon has stated, "The last book will have a happy ending, though I confidently expect it to leave the readers in floods of tears, anyway." The ghost will just be the teary cherry on top.

8. Sam Heughan Knows About The Ghost "For A Specific Reason"

Besides Gabaldon, there are two people who actually know why and how Jamie's ghost is in the 20th century: Outlander star Sam Heughan (he plays Jamie, but I didn’t have to tell you that) and the Starz show's original showrunner Ronald D. Moore. She showed the final ghost scene to them "for a specific reason,” she tells me, "which I won't tell you." Dammit.

But even Heughan and Moore don't know what comes before that final ghost moment. As for the true ending, Gabaldon claims, "Only I know that."