Goodness, can’t leave you lot to your own devices for long, can I? Given the amount of traffic I see in the stats for this page, I conclude that the Casting Wars are still boiling along.

1) People are entitled to their own opinions. Naturally, I’d prefer these opinions to be expressed—and received—civilly, but up to you, of course. I believe in the virtues of free discourse.

Now, my opinion is based on rather more information than most others expressed here, because

a) I created Jamie Fraser and thus—presumably--have a pretty good idea of what he really looks and acts like.

b) While I haven’t yet met Sam Heughan, I’ve seen Rather a Lot of him (about 95%, at a rough guess), both in terms of

Naturally, everyone forms mental images while reading. Everybody. I do it when I read other people’s books, too. Now, I can’t imagine why anyone—having read OUTLANDER—would form an image of Jamie as a 7-foot tall Bozo the clown on steroids, but you know….whatever floats your boat.

Why anyone should expect a film company to a) telepathically extract your personal vision of a character and b) try to replicate that onscreen is one of the Great Mysteries of the Universe, and I’m not about to try to solve it here—I got a book to write, among other things, and there are only so many hours in the day.

So I’m just going to say This about That:

Y’all have not seen Sam Heughan “be” Jamie Fraser.

Now, when they told me who they’d chosen and that they were sending me the audition tapes, I was in the car, driving from Phoenix to Santa Fe with my husband. Unable to get to my computer until we got to Santa Fe, I was madly googling “Sam Heughan” on my iPhone (my husband was driving, I hasten to add).

Frankly, I thought he looked bizarre. He’s 6’3”, that’s fine…very chiseled face, but oddly chiseled, and what’s with the large forehead and cleft chin?!? Jamie doesn’t have a cleft chin and his nose is not all that long, though it _is_ straight…and good grief, I know we wanted somebody who could play a 22-year-old virgin, but this guy hardly looks like he has hair on his behind, let alone the dangly bits…but…

But you know, I _do_ understand what it is that actors do.

(Do you know that, btw? What they do is magic. They can become somebody they aren’t—and their physical outline is just Really Not That Important. (Within limits. Tom Cruise as Jack Reacher is a long way outside those limits…).)

So I sat down at my computer, sort of looking warily through my fingers. Willing to suspend disbelief if I could, but kind of dubious, you know?

So here he is, dark-haired, in a long-sleeved gray T-shirt, and I’m thinking, “Boy, he doesn’t look _anything_ like his IMDB photos, he actually looks pretty human, that’s a relief…”

And five seconds later, Sam Heughan was GONE, and it was Jamie Fraser right there in front of me. True. No costume, no makeup, no props, nothing but cues from an offstage casting director, and…it was him.

He did two scenes. First, a confrontation with Dougal, right after Dougal’s ripped his shirt off in the tavern.

Second scene was even better; it’s the scene where Jamie explains to Claire exactly why he’s about to punish her.

Now. In the months since then, the production people have been kind enough to show me the occasional glimpse of this or that. I _have_ seen the red hair in its full glory (it took seven tries—and 27 hours in a salon chair, I was told by the victim), and speaking as someone married to a red-head (himself Jamie’s original body model) and with two more in residence…it’s definitely the right kind of red.

Red hair—as I notice a few red-heads have been mentioning—looks Way Different, depending on the light. Unless it’s truly carroty (and Jamie’s is Definitely Not), sometimes it looks almost brown, sometimes it’s red-gold and sometimes it’s all different colors and sometimes it has almost-blond highlights and sometimes…well, let’s put it this way: it doesn’t look like Bozo the clown or Shamus the Wrestler, it looks like Real Hair, just red. (And if you really worry about this, do go and google “red deer images” and _see_ what the heck a red deer’s pelt looks like.)

But beyond the physical details (which are, um…Really Good, and decency prevents me going further, save to say that while Jamie certainly doesn’t look like Thor (gag me with a spoon), he—and Mr. Heughan—look Very Nicely Muscled indeed)….Sam Heughan can _act_. And he totally nailed it.

So. Feel perfectly free to express your own opinions. (I don’t know quite what people expect as a result. Surely they don’t figure that Starz will say, “Oh, no! Robyn MacGillicuddy Stimson thinks Chris Hemsworth should be Jamie! Get Hemsworth’s agent on the phone!” Or at least I hope they don’t think that…) You’ll change your mind in due course.

Or I’ll pay you a dollar. 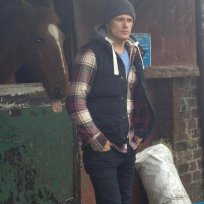