A reader's question to Diana Gabaldon about Jamie's kiss to Laoghaire.

"Jamie says he wanted/loved Claire from the moment he saw her. Why would he have any interest in Laoghaire? More precisely, the night of the songs. He seems to be doing everything he can to snub Laoghaire and favor Claire. But the next morning, Claire discovers Jamie and Laoghaire kissing. I don't understand how he can be in love at that time. Why doesn't he pursue Claire more?"

"Jamie has no reason to think that Claire might be interested in him, although he undoubtedly feels the physical attraction between them. But she's an Englishwoman, probably a spy, most likely in cahoots with the same red tunics that brutalized him and his family — and even if none of that was true, she's an outlaw. He therefore has no property, no way to support his wife, and could very well be arrested and hanged at any time. He was raised by his father to respect women and not seek them sexually, unless he was willing to do the right thing for them. In addition, Claire is a very recent widow and she misses her husband. Given all this, it is no wonder that he does not take a step towards Claire, although he is intrigued and attracted to her (and he does not lie later, when he said he wanted her right away) - ride a horse tightly against each other on a cold and rainy night, warm in a shared plaid, is somehow conducive to sexual arousal, especially in young men. Nor does he lie when he says he loved her when she cried in his arms – he is very moved, both by her distress and by the obvious trust she places in him).

As for Laoghaire - he took the beating for her because he has a strong sense of empathy and compassion (the same feeling that made him hug Claire and comfort her when she cried for Frank). He has already _been_ physically beaten in front of the whole Hall of Leoch, and has already felt the deep humiliation and pain of this episode. He therefore proposes to accept Laoghaire's punishment. He _may_ also (although he doesn't tell Claire, so it may have been unconscious) have realized that this gesture _is_ quite heroic (although not dangerous; he is not afraid of being beaten at all), and that by doing so, he quite neatly erases the humiliating memory of his own episode and can highlight himself for the pretty Englishwoman. That is, he does not think at all of Laoghaire, except for the way one has pity on a small defenseless animal.

But when Laoghaire comes to thank him afterwards... well, he's not engaged anywhere else, obviously has no future with Claire (he never thought it could happen, which is why their hasty marriage both drove him crazy with joy and turned him upside down), and... It's a girl. She wants to kiss him. He is 22 years old and has not touched a girl for a very long time. There is no way he will push it away or reject it. But he never sees her as a potential wife or even as a sexual partner (for him, it would be the same thing)." 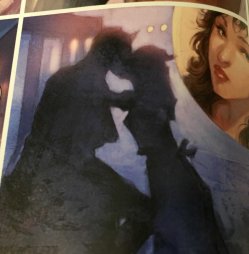