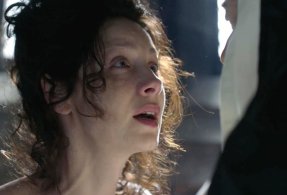 This is where not only all the talent, but all the wealth of soul of Milady Caitriona Balfe expresses itself. Her sensitivity has managed to capture the pain of mothers who have lost a child and her empathy allows her to take ownership and deliver a breathtaking performance. What about the scene, again close up on her beautiful face, or she tells Jamie these atrocious moments? I also think that Sam Heughan who is in himself an exceptional actor could not help but be magnified in his role and his reactions to Milady Caitriona Balfe and the absolutely amazing acting game that she deploys at that moment and who speaks directly to the heart

The final scene is breathtakingly beautiful in all senses of the word and I have to hold my breath not to cry when Jamie puts the spoon of Saint Andrews on the grave saying he is leaving a little bit of Scotland with Faith. I note, for the 5th time, a symbol that is probably not fortuitous: when Jamie returns from the Bastille, we do not see any physical contact between them until this moment, in an act of ultimate forgiveness, Claire tends her hand to Jamie and where they form only one again in front of Faith's grave 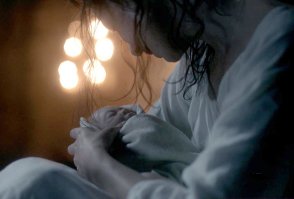 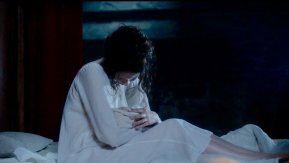 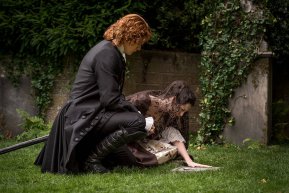 Last but not least, the music cannot be put aside in the quality of this masterpiece episode and the solo piano and the bass strings, especially when Claire tends Faith to Louise,

Although I may sound ridiculous, I would like to share with you my emotions and my opinion on the episode "Faith" of Season 2 and I would like to do it warm, as I just watched for the 5th time this masterful episode of dignity, emotion, humanity and artistic quality. And as I'm still with wet eyes and breath taken. The episode almost sums up, for me, all that the Outlander series provide in emotional intelligence and it all rests on Caitriona’s Balfe’s shoulders.

This beauty, this sensitivity in the eyes, this elegance in any outfit, this sweetness that emerges even from its strength of character. Before the wedding, Murtagh tells Jamie that Claire's smile is as sweet as her mother's. And I paraphrase a quote from another series that has nothing to do: Claire has "a smile to die for".

Claire's character is already endearing but Caitriona Balfe is staggering in her performance. The close-up on her face when she realizes that Faith is dead and the madness that reaches her during the few hours she cannot accept it, then the sad dignity with which she tells this macabre day to Jamie totally amaze me . Already 3 or 4 times I see this episode and little Tim, yet reserve captain, paratrooper, plane pilot and semi-marathoner fights like a beautiful devil to hold back the tears and succeeds only once On two. 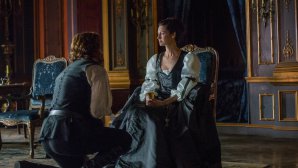 Certainly, Claire is a fictional character and Miss Balfe is an actress and I never lost consciousness but I admit that the emotions that the two made me cross have upset me to a point that I did not suspect to be able to reach.

I say it blankly: Caitriona Balfe should have received an Oscar, a Golden Globe, a Caesar, a Golden Bear and I do not know yet what other reward exists in the dramatic arts world. It's not even about categories, movie or TV. It is simply the absolutely staggering intensity that she managed to put in this episode that she holds completely and entirely on her shoulders, with still special mention for Mother Hildegaard, for Fergus and for Magnus, for this moment when he briefly shuts his eyes in front of Claire's reverence.

The actors of this series, even in the small roles, are exceptional and I think, by reviewing this episode that it is a marvelous conjuncture between the scenario, the characters, the casting and especially, the incredible quality of the leading actors.

I think Caitriona Balfe, in this episode, and by the intensity that she puts there, has magnified the work of her colleagues and allowed them to act in a more natural and therefore more sensitive way.

When Mother Hildegaard puts her hands to her mouth after telling Claire that Faith was dead, I think this gesture was made obvious to the actress by what she saw, like us, in the eyes and non-verbal language of Caitriona Balfe.

I think that when Fergus helped her off the carriage, in this dignity of infinite sadness, the young Romain could not help but be in that attitude of tenderness and compassion that he showed so well with his beautiful face and his so expressive eyes. And when Claire bows slowly in front of Magnus, after putting his hand on his heart and then taking his hand, the actor's reaction seems so spontaneous that it may well have been, so moved was he by that he saw in Milady Balfe acting.

It is by design that I call her here Milady Balfe because she deploys such nobility and such beauty, in both body and soul, in this episode, that it is more for me that the mere technical evaluation of a dramatic performance. It's the language of her heart that spoke directly to mine.

I assure you, I'm not falling into the mental pathology, which I have forgotten the name, and that is to be really in love with a celebrity. I'm not crazy and I do not have posters of her at home. But it is undeniable that it is really her person and her emotional capacity that strikes me and not only the character she interprets. And, that makes me laugh at myself, but I realize that, although I sometimes disagree with the political and social opinions she defends on her Twitter or Instagram accounts, I find myself opening myself to her opinions, to reflect on her positions with a desire to find common ground and, when I can't, to find her excuses! To love a person's defects, I'm told, is the sign of the sincerity of the feeling and it seems that it is a little what I do with her!

I know from interviews she gave on this episode that the game of Milady Balfe is the result of research work and that she did not experience this terrible situation herself. But this close-up scene on her face, where her eyes are crossed by the first phases of mourning, incomprehension, rejection, claim, with the excitement that makes her tremble surreptitiously as she slides towards irrationality is hard to bear for me . And when the Marquise de Rohan comes to help unravel this irrationality, the protective mother's gaze, like a cat who looks aggressively at the intruder who approaches his offspring, mixed with incapacity and even a palpable refusal to come back to reality, is terrible and causes so much compassion and concern. 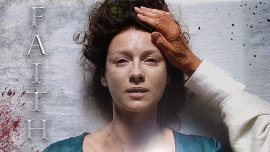 or
The wonderful Caitríona