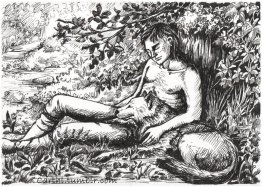 Towards the end of Book 4, we see young Ian sacrificing himself to allow Roger to return to Brianna. I have long thought that this gesture sealed the end of his childhood and that it entered fully into adult life. But I have just reread chapter 70 of volume 6, this passage where he feels lost and hesitates. Should he go back to the Mohawks and fight to win Emilie back, or should he start a new life in Fraser's Ridge? And there he asks Brianna ...

All of this makes me reflect on his journey and his relationship with women. He was raised by Jenny, a woman with a sacred personality and a lot of character. He sought to emancipate himself by going to join his uncle Jamie in Edinburgh ... Finally, he went on an expedition with him but found himself kidnapped by pirates who will deliver to Mistress Abernathy's pleasure. While settling in Fraser's Ridge, he was still clearly under the influence of his Uncle Jamie and Aunt Claire.

During his stay with the Mohawks, he lived in a community where women were listened to. A man does not enter into a relationship with a woman unless she gives her consent (far from the Western model of the 18th century). It was therefore desired and accepted by Emilie. When it turned out that their marriage would remain sterile, she began to set her eyes on her brother-in-law and one of the oldest and most respected women in the village literally kicked him out. from the community. He didn't even get the chance to have a last conversation with his wife. He didn't have a say.

Back in Fraser's Ridge, he is a free electron and a shadow of himself. Brianna realizes he is not getting enough food. On their wild ride, he recognizes that he needs to have someone to feel like he belongs in a place - hey! it's reminiscent of Jamie's thinking about telling Claire she was his home. At that moment, it is his cousin that he asks what to do. He doesn't ask his opinion, he asks him for a direction! She understands him and answers him ... and he does as she tells him.

And then, during one of his wanderings, he meets Rachel. A strong woman in her own way but also capable of great gentleness. He has his inner demons and doesn't know what to do with himself. He is not even sure what he is, sometimes Indian, sometimes Highlander ... She has a remarkable capacity for understanding, tact and a lot of generosity (and courage!) To go to him and accept to take it as it is. I have the idea that I finally became a full man the day he decided to marry her ...

And you what do you think?