The penultimate episode of Outlander Season 5 begins to answer the questions raised earlier in the season: Will the Regulators and Browns come back? Will a new villain replace Bonnet?  Although, on the one hand, novel writer Diana Gabaldon uses the script to flesh out character development and fan-favorite moments from the novel, the plotting designed to bring the main story arcs of a season to a close feels somewhat rushed.

“Journeycake” sets the tone for an episode of conflicting emotions right from the beginning, with scenes that swings from tense drama to warm and fuzzy family nostalgia. Right before the cold open, viewers see in the credits Claire in her Batsuit eating peanut butter and jelly sandwich  The cold open shows Jamie, Claire, and Roger find an entire family of Dutch settlers burned to death. A fragment of a native arrow is the only clue concerning who the culprit might be.

The Browns reappear to ask Jamie to muster up a militia as part of their Committee of Safety to apprehend the arsonists. Jamie is tired from a year of serving Governor Tryon so he declines their invitation. Historically speaking, Jamie is correct to be wary of this Committee of Safety, past grudges with the Browns aside. These groups, which were initially formed to stop criminal activity in rural areas, also became the new outlet for the defeated Regulators’ anti-government agitation. In addition, these groups also frequently fought with native tribes without government permission to expand settler territory in violation of existing treaties. Ian’s protest that the tribes were being blamed for white vigilante actions alludes to this fact. The question of possible grudges comes to play later on in the episode.

Throughout the season, Roger and Bree have struggled with finding their place in the 18th Century. They were waiting for a sign Jemmy can go back in time. Jemmy starts playing with Otter Tooth’s opal stone but then his hands start to burn and he hears a buzzing sound. He’s inherited the time-traveling gene from his parents and Claire. Roger and Bree prepare a story for those who do not know their secret that Roger accepted a professor position in Boston. The dialogue counts the days until the Mackenzies depart for the stones.

Ian comes to terms with the fact his aunt and cousins are time travelers. While this was a good opportunity for Ian to reveal a bit more about the past he wants to change, it exposes inconsistencies from earlier episodes. In previous episodes, Claire openly discussed future medical knowledge in front of Ian and Marsali, who may know the truth.  Ian’s own backstory as explored in “Famous Last Words” fails to connect with the dialogue between Bree, Roger and Ian in this episode. Ian told Roger about his dead or divorced wife. Bree was not there, so her advice in this episode should have had more of a ring of shock to it since this is the first time Ian has mentioned his wife to Bree. Fans looking for an immediate resolution to Ian’s plotline may have to wait until Season 6.

In the same way that Claire and Bree revealed their secret of time travel, Jamie finally tells Bree about her half brother Willie. This admission also coincides with the news that Lord John Grey is going back to England to manage the estate of the now-deceased Lord Dunsany. Aside from questions about how fast Lord John Grey is able to travel, There are two downsides to the return of Willie mentions in the story. First of all, Jamie and Bree’s final chances to bond as a father and daughter are now muddled with an outside disrupting element. Secondly, how Jamie phrased what happened with Geneva clearly evaded the fact that Geneva raped him. Despite the editing of the novel version of events in Season 3, Geneva abused her family’s power as a prisoner. Jamie could not have said no without facing legal and physical consequences. It would be no different than the son of a landowner in this era forcing a woman servant, indentured servant or slave to have sex with him. Some fans may argue Jamie worded his explanation carefully to avoid reopening old wounds for Bree, but this scene just serves up another example of how the show fails to question the book canon narrative on rape.

While Willie’s plot raises canon questions of the past, this episode’s resolution of Forbes and Bonnet’s scheming at River Run raises questions about the future. Jamie and Claire allow Ulysses to shelter in the woods. He admits he would never be found “not guilty” by a white jury, even if the facts are clear he was protecting his employer and himself in self-defense. His actions would raise suspicions about why he killed Forbes, who was a witness to his manumission from slavery. Was he hiding an affair with Jocasta? Are the manumission papers forged? The novels explicitly state Ulysses was one of several lovers Jocasta had, but the show has only implied platonic friendship between the two. Consent with slave and master relationships is increasingly under scrutiny by black historians, which partially explains the show’s decision to make Murtagh Jocasta’s lover.  His conversation with Jamie and Claire shed a lot of light into slavery that past episodes didn’t address. Within England in this era, slavery was legally unenforceable, and there was a growing movement to repeal the colonial slave codes as well. Will fans see more of Ulysees in Season 6 or other characters that will bring up slavery?

The changes to Ulysses storyline, as well as moving up the Mackenzie family return to the future, are clearly signs that some of the overly-complicated plots from A Breath of Snow and Ashes are going to be condensed for time. Book readers should be prepared that their favorite secondary characters and plot points from this part of the series not to be seen on screen.

Cuddy Brown and his wife Rose come to Claire’s surgery to treat her wrist injury. Claire’s medical practice until this point in the episode is a mix of routine visits and interesting experiments with viewing Jamie’s semen under a microscope.  They also bring vague news that Bonnie Beardsley is doing well. (One may wonder how well since her skin color still hasn’t been seen to be an impediment.) As Claire diagnoses that Rose’s injuries may be a product of domestic violence, Cuddy begins to snoop around. He notices “Dr. Rawlings” inscribed on Claire’s medicine box. Rose mentions the pamphlet advice on birth control, which is another indicator she may be under duress in her marriage.

After they leave there’s a jump in time to after Bree, Roger, and Jemmy’s departure from the 18th century. All was relatively quiet on the Ridge until Jamie’s distillery suddenly catches fire. Claire and Marsali try to fight the bandits off but they drag Claire away. Poor Germain is the one to tell Jamie that Marsali is knocked out and Claire is abducted.

“Journeycake” leaves viewers hanging when it comes to connecting the dots between discontent with Fraser’s Ridge and overall political discontent. Are the same vandals who burned the Dutch family’s cabin the same men who abducted Claire? If not, did the Browns or others plan to silence “Dr. Rawlings” or punish Jamie for his refusal to join the Committee of Safety? Where did Bree, Roger, and Jemmy land after coming through the Stones? These questions will be at the top of everyone’s minds going into the season finale next week. 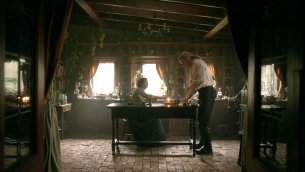 Article written by Brooke Corso in May 2020
Link to original: http://www.outlandertvnews.com/2020/05/outlander-episode-507-reflection-nobody-knows/