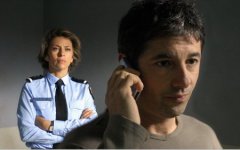 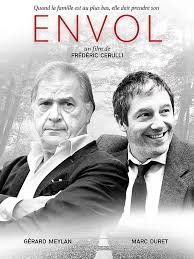 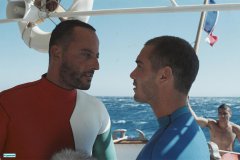 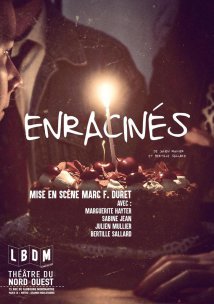 Revealed by Luc Besson in the Big Blue, named to the Césars for his performance in Nikita, Marc traces his path in Should he love Mathilde (E. Bailey), Hate, (M.Kassovitz - price of the mes in Cannes), Doberman (Y. Kounen) or Stop Crying Penelope.

In Italy, he is Martino in L’esigenza di unirmi ogni volta con te by Tonino Zangardi (Getaway of love) with C. Gerini / M.Bocci and Marcel in Il Commisario Maltese (Rai 1).

He plays in international series: The man who lived at the Ritz (NBC), Star Hunter (Canal +), Dalziel & Pascoe (BBC), The Philanthropist, Borgia by Tom Fontana where he is the Machiavellian Cardinal Briçonnet ...
Then Ronald D. Moore's Outlander, where he is the epicurean minister, Jo Duverney.

He shoots In the name of Athens (in Ancient Greek) directed by Fabrice Hourlier who then hires him for the role of Napoleon in Napoleon, the Russian Campaign, a prestigious Docu-Fiction for Arte.

Valérie Gay Corajoud: Hello Marc
I am delighted that you agree to spend some time with your French fans, who, like me, particularly appreciated your interpretation of the sympathetic Joseph Duverney, Minister of Finance for King Louis XV, during the second season of the Outlander series.

VGC: When you look at your filmography, you notice not only an incredible abundance, but also your wide range of roles. It seems to me that you are able to play everything!

VGC: In that, did the character Joseph Duverney add an ace to your game? Or does he look like another character you had played before?

MD: The character of Jo Duverney was a first for me, because he is the only element of comedy in this episode, and that he had to be held not only as a representative of the King of France but also as an illuminated power he thinks he has of himself :-) As for the quality of artistic direction of Metin Huseyin, it brought me a lot.

VGC: Did you take the time to watch the first season of the Outlander series, or even read the saga of Diana Gabaldon before joining the set? Or, in the end, were all the scenes linked to the Parisian court 'isolated' from the rest, a bit like: a film within a film?

MD: No. I only watched a few episodes of the 1st season to get me in the mood for the show. The scenes related to the Parisian court were not isolated, on the contrary we felt at home and the reception from which I benefited, whether artistic or technical was top! Great people!

VGC: If you had the opportunity to go back in time and play another character in the series, who would you wear and why? (Whether a French character or not).

MD: The same. With the power of interstellar travel! And also maybe: put a block to Sam in chess!

VGC: What did you think of the very particular look that Diana Gabaldon, then the scriptwriters of the series, had on French people in general and on Versailles in particular? To be honest, we were a few French fans to find the line a bit forced on the ridiculous side of the king's court.

MD: “The line a little forced? Maybe… ”And yet… it was the reality of that time :-) Reality which is sometimes still relevant today in my opinion :-)

VGC: Was it complicated to join a team, and especially actors who had known each other for over a year and who seemed to get along really well?

MD: No. Not at all. The cast was of high quality, the reception magnificent, the festive atmosphere and the work involved exciting.

VGC: Many French actresses joined the cast during this second season of Outlander. Have you had the opportunity to play with some of them before that? Sometimes, outside of filming, do you meet between French people, just to find yourself a bit like at home?

MD: Yes. I’ve already worked with Stanley Weber on Borgia by Tom Fontana. It was a pleasure to meet us on this show. I also knew the excellent Dominique Pinon. I do not remember that the Frenchies were apart, or confined, the show was a European model at all levels. Like a big family if you want ... A fine example of European politics :-)

VGC: During the scene where you dry your wig by the fire, you have the feeling of a cordial understanding and a good communicative mood. Can you tell us about the atmosphere of the set? As well as your relationship with Sam Heughan and Caitriona Balfe?

MD: Entente cordiale yes :-) While defending his interests :-) The pleasure & the desire to access the stage every day testify to the excellent atmosphere in which we worked. Sam is an actor and a man of great quality. He is very attentive to his partners, generous and very simple. Happiness as an actor. As for Caitriona, she is a Princess! Woman: One of a kind! And an outstanding Actress!

VGC: That said, having seen some of your films, it seems to me that you have that kind of positive energy. Can you tell us about your fun playing?

MD: Thank you. The pleasure of playing must go back to my ancestors (my Italian grandfather Francesco must be for much) And then the pleasure of sharing with human and… funny professional actors makes us surpass ourselves! In addition, humor was essential. English humor especially :-)

VGC: And what about your future projects?

MD: A play (Henri IV) by Ed Oppenheimer of which I will be the adapter, the winner Adami & the performer. Then a film (Envol) by Fred Cerulli which we will soon shoot on the French Riviera

VGC: A question that may not be of much interest to others but that I can't help but ask you anyway: Did you finally take the time for a real game of with Sam Heughan in this magnificent setting (which is in Prague if I followed everything correctly)?

MD: In Prague yes, a wonderful city. We shot in the sublime library of Strathov where we took the time to prepare the part as it should be (Sam & I already knew how to play) We nevertheless had a coach from Eastern Europe who briefed us but like her did not speak English, we also had a translator who took over from time to time so that the game matched the rhythm of the scene, It was epic, funny and also very successful in my eyes

VGC: Finally, if you were to write an epitaph about Joseph Duverney, what would be the terms?

MD: 'To our Jo Duverney: He will have drunk well, eaten well, humhum well & we hope he will be forgiven up there!'

VGC : Thank you dear Marc for the time you have given me. I find in your answers, the energy, the passion and the humor that show through in your acting. And I'm almost certain that Joseph Duverney would not have responded in a tone other than yours.
Until you find yourself in a new role and a new setting.