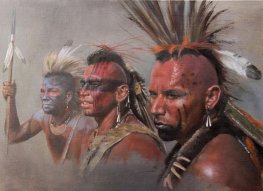 While the Fraser live in good harmony with the Cherokee Indians whom they have come to know and appreciate, live, 1,000 kilometers further north, the Mohawks, belonging to the Iroquois nation, some of whose members travel long distances in order to make barter.

It is to one of these tribes that young Ian entrusts the fate of the unfortunate Roger, and with whom, ultimately, he will live a few years.

North American Indian tribe belonging to the linguistic family of the Iroquois and originating in the current state of New York, The Mohawks are one of the six great Iroquois nations, which are, from east to west: the Tuscaroras, the Sénécas, Onneiouts, Onondagas, Cayugas and Mohawks.

They owe their name to their hereditary enemies, the Algonquins, for whom Mowak means 'man eater'. In their own language, the Mohawk people call themselves Kanienkehaka, which means, depending on the context and interpretations: 'people of light', 'lightning men', 'people of flint' or 'children of the stars'.

They were also called Agniers in French and Maquas in Dutch.

The Mohawks, like the other Iroquois tribes, led a semi-sedentary life. They had a tribal council chosen by the mothers of the clan (matriarchs or women chiefs of file.) But they were also subjected to the decisions taken by the Large Iroquois Council to which nine of their chiefs represented the interests of their tribe. In short, the Iroquois Confederation was one of the examples of representative democracy used as a model by the founding fathers of America, whose governors of each state are, even today, subject to the American government. 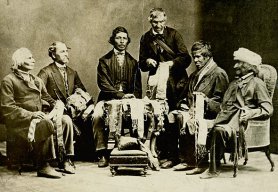 Within their village, The Mohawks lived in longhouses, which were large wood-framed buildings covered with leaves of elm bark and which could be over 30 meters long. An entire clan lived there. (up to 60 people) 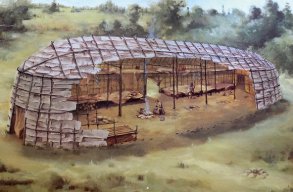 Like their neighbors, the Mohawks are agricultural peoples who depend on the 'three sisters' (corn, beans and squash) for food. If the fields are first cleared by men, the responsibility for planting, tending and picking the crops rests with the women of the village.

The principle of the three sisters, in addition to its nutritional virtue, was that the three plants help each other to grow (plant companionship)

The stalk of corn serves as a stake for the climbing bean. The large corn leaves also protect the squash from the wind and the sun. The bean, like the other plants in its family, is capable of capturing dinitrogen from the air, to provide a kind of natural fertilizer to the two other plants, which grow much better. Squash, by spreading its large leaves close to the ground, prevents weeds from growing (and therefore 'stealing' water and nutrients from other plants), and it retains water, preventing it from s 'evaporate. The stems and leaves of the squash also carry thorns, which protect it from herbivores, but will also protect the corn and beans around which it grows.

The clans were still led by women, who made all decisions regarding land and resources for each clan. But the Mohawk chiefs, who made military decisions and trade deals, were still men. Only men represented the Mohawks on the Iroquois Grand Council, but only women voted to determine who would be the representatives of the Mohawks. 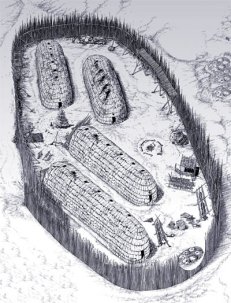 In addition to the nine representatives on the Iroquois council, each Mohawk community had a local council which guided the village chief (s).

They were divided into three clans: the bear, the wolf and the turtle.

The Mohawks often waged war against their neighbors, the Algonquins.

When the Dutch introduced firearms as a means of paying for beaver pelts, the Mohawk victories became more numerous. However, contact with Europeans caused a rapid decline in the population. Most Mohawks took the side of the English in the war against the French and the Indians. But some of them, who were converted to the Catholic religion (the devout Indians of Quebec), and who were installed in missions along the St. Lawrence and especially in Caughnawaga, espoused the cause of the French. They even served as guides in expeditions against their former allies in the League of the Iroquois.

Later, during the War of Independence, under the influence of their leader Joseph Brant, the Mohawks took the side of the English.

Their descendants are settled in the Bay of Quinte and on the Six Nations Indian Reserve in Brantford, Ontario.

During the 18th century, the Mohawks, grouped in two main cities on the Mohawk River, became increasingly in the minority compared to settlers from Europe.

They adopt the types of houses of their neighbors and maintain close links with the British administration.

The Superintendent of Indian Affairs, Sir William Johnson, married Mary Brant, a Mohawk, and used the warriors of his tribe against the French in the Seven Years' War (known in North America as the war between the French and the Indians). William Johnson died before the start of the American Revolution. However, the Mohawks engaged in this conflict in 1777 under the command of Joseph Brant (Thayendanegea), the brother of Mary, who had just returned from England. With his warriors, they inflict several defeats on the Americans, but they are finally forced to abandon their homes. These are confiscated and used by American settlers 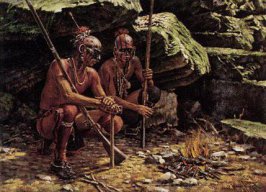 After the war, Joseph Brant and his men settled near the Grand River on a concession (now called the 'Six Nations Reserve') granted to them by the governor. Other Mohawks, led by John Deserontyon, settle in the Bay of Quinte. Most of them being Anglicans, the money donated by Queen Anne is shared between the two reserves.

Joseph Brant and Teyoninhokarawen (John Norton) also led many Mohawks in combat during the War of 1812, where they fought on the side of the British. This alliance lasted until the 19th century, when skilled Mohawk navigators from Kahnawake, near Montreal, were recruited to transport General Garnet Wolseley's army to the Nile in 1884-1885.

Mohawks, like many Native Americans, also supported the armed forces in both world wars, as well as in other armed conflicts.

Despite Council Opposition to the Enrollment of Reserve Members, the Six River Iroquois Community of Grand River South of Brantford, Ontario, Provides More Troops than Any Other Aboriginal Community in Canada during the war of 14-18. About 300 of them went to the front. In addition, the members of this reserve, the most populous in Canada, donated hundreds of dollars to help war orphans in Britain and to provide other relief to war victims.

Many of the volunteers from the Six Nations reserve were first members of the 37th Haldimand Rifles, a regiment of non-permanent active militia established on the reserve. This regiment supplied most of the members of the 114th Canadian Infantry Battalion, which had been recruited for the region. Fifty Mohawks of Kahnawake, Quebec, along with several Mohawks of Akwesasne, joined the recruits from Grand River in this unit. Aboriginal people from western Ontario and Manitoba also became members. 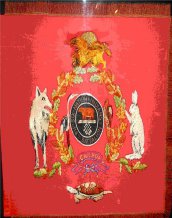 Today, just over 16,000 Mohawks live in Quebec, mainly in the following territories:

Kanesatake (2,508 inhabitants), near Oka in the Laurentians, territory reserved for the Mohawks, but which does not constitute an Indian reserve within the meaning of the Indian law;
Kahnawake (10,946 inhabitants, formerly Caughnawaga), near Châteauguay - reserve;
Akwesasne (shared between Quebec, Ontario and New York State), also known as Saint-Régis - reserve.
Outside Quebec:

Ganienkeh and Kanatsiohareke in northeast New York State;
Tyendinaga and Wahta (Gibson) in southern Ontario;
the Six Nations reserve, where they form the majority of the inhabitants of this mixed Iroquois reserve in Ontario.

In 1985, the Quebec National Assembly officially recognized them as one of the ten Aboriginal nations of Quebec (Abenaki, Algonquin, Attikamek, Cree, Huron-Wendat, Micmac, Mohawk (or lamb), Innu, Naskapi and Inuit). 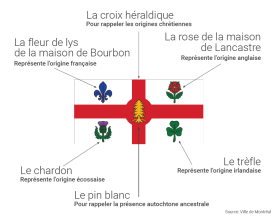 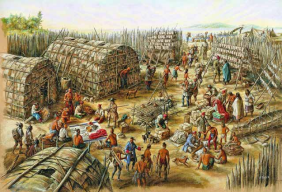