It was a death that had to happen, but one which added a great deal of poignancy to Sunday night’s episode of Outlander season 5. Jamie Fraser’s (Sam Heughan) godfather Murtagh Fitzgibbons (Duncan Lacroix) was killed after saving Jamie’s life.

“Murtagh’s death…well, I have mixed feelings about that,” author Diana Gabaldon exclusively tells Parade.com. “As played out in Ep. 507, it’s shocking, heart-wrenching, sorrowful and accompanied by some top-notch acting by Duncan Lacroix, Sam Heughan and Caitriona Balfe. I loved it!”

Murtagh is killed during the Battle at Alamance doing what he promised Ellen Fraser he would do on her deathbed: Watch over her son. Jamie’s life was in jeopardy as he was trying to talk a Regulator out of shooting him, when Murtagh happens upon the scene and shoots the Regulator–one of his own men–to save Jamie’s life. Before Jamie can say anything, one of Jamie’s own militia–who he has taught to shoot first and think later–shoots Murtagh.

Jamie rushes over to his godfather and in his upset reminds him that he had released Murtagh from his promise to Jamie’s mother, meaning he shouldn’t have tried to protect him. 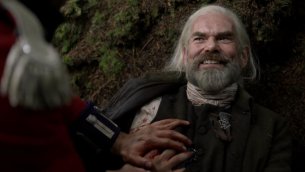 Murtagh dies, saying, “I would never betray your mother no matter who asked.”

Jamie refuses to accept his death and rushes Murtagh to Claire’s (Balfe) hospital tent, sure she will be able to save him, but he is already DOA.

“As for the effect of Murtagh’s death and the timing of it–this is the turning point for Jamie; the place where he definitively severs his connection (however unwilling) with the Crown and becomes in his own soul a Rebel,” Gabaldon says.

Outlander has been building to this emotional moment ever since season five began with a scene that tugged at our heartstrings. A very young Jamie was being consoled after the death of his mother by his godfather, who promised he would always watch over him.

Then we flash forward to an adult Jamie being instructed by North Carolina Governor Tryon (Tim Downie) to hunt down and arrest–or kill if necessary–the leader of the Regulators: Murtagh!

So, all season, Jamie was caught between a rock and hard place. His love for his godfather is great, but so too is his need to appease the governor in order to keep possession of Fraser’s Ridge, which is home not only to Claire, Brianna (Sophie Skelton), Roger (Richard Rankin) and Jemmy, but all the other folks who have moved there, set down roots and depend upon him.

While Murtagh’s death at the Battle at Alamance has the requisite emotional impact, the real Murtagh–i.e. the Murtagh in Gabaldon’s novels–actually died at the Battle of Culloden, some 25 years earlier.

“Murtagh died at Culloden because he was such an important man in Jamie’s life,” Gabaldon explains. “There had to be a visible and deeply emotional price to that battle: not just a recounting of fighting and depersonalized mass slaughter; we needed to suffer not only Jamie’s physical wounds, but his grievous personal loss of the most important man in his life.”

And in the books, the impact of that loss is seen most clearly during Jamie’s 10-year exile: the seven years in a cave above Lallybroch, and three years as a prisoner of war in Ardsmuir.

“Had Murtagh been by his side through those experiences, he wouldn’t have been so truly, devastatingly alone—and that experience of solitude and loneliness is a major part of his life, and a defining part of his character going forward,” Gabaldon says. “Luckily, Murtagh stayed tactfully gone while Jamie was in the cave, but having him at Ardsmuir [in the series] did change the emotional tone for Jamie.”

So, when Gabaldon was informed by then Outlander showrunner Ronald D. Moore of the decision to keep Murtagh alive, her first thought was: What do you plan to do with him?

“A Murtagh is a generally useful thing to have around, but the context of the story has changed; he can’t just be Jamie’s sidekick and periodic rescuer. He’s had a separate life in the Colonies for years; what kind of man would he be, now?” she wondered.

Then, when Gabaldon was invited to meet with the new writers’ room for season four and she learned of the reappearance of Murtagh, she came up with her own idea for a storyline in hopes of keeping the writers from changing existing storylines by inserting Murtagh into them.

“Now, I can’t say they weren’t thinking of these possibilities themselves, because I’m sure they were thinking madly—but FWIW, I did suggest to them that Murtagh (given his personality and experiences with the British Crown) might well be involved with the Regulators,” Gabaldon says. “The War of the Regulation forms the political backbone of The Fiery Cross, but is a difficult historical event to explain simply to people. That explanation would be a lot easier, if Murtagh was made a part of it.”

But that wasn’t her only contribution to the newly created storyline; she also reminded them that Murtagh had been passionately in love with Jamie’s mother, Ellen, all his life. So it was possible if he then met Jocasta (Maria Kennedy Doyle), Ellen’s younger sister, all these years later, might he not be intrigued by her?

So, TV Murtagh lived on past the Battle of Culloden, winding up in the New World as a leader of the Regulators and as a lover for Jocasta, but in the end, he was a hunted man and his death was inevitable. Even so, he was able to die a hero’s death.

“Nobody lives forever, not even on television,” Gabaldon offers. “Plainly, Murtagh needed to die sometime, and where better than at the Battle of Alamance? The irony of his being killed by the young militiaman that Jamie had schooled in the art of war added an extra bit of horror and poignancy to his passing, and Jamie’s sense of shock and grievous loss was palpable,” she says. “The loss of his godfather, his protector, his oldest and best friend, the man who had been by his side since childhood…for Jamie, this is stepping off a cliff into a thousand-mile deep pit, and he’s in free-fall.”