The body of Sam

His turn as rugged, romantic Jamie Fraser on Outlander has made Sam Heughan one of the most desired men on TV. But despite the heightened interest in his assets, the 37-year-old Scottish actor remains impressively self-aware and humble. (Hell yeah, those ridiculously perfect, bodice-ripping sex montages interfere with his personal life!) On the eve of season three of the beloved Starz sci-fi series, we called him up to ask some questions.

Sam Heughan: I’d say this: Diana Gabaldon has very good taste, and she would know a fine ass if she saw one. [Laughs.] Really, I feel very fortunate that she’s given me that title. And if that’s what you’re looking for, season three won’t disappoint.

Glamour: What did it feel like when she said that? Were you embarrassed or [did] you take it in stride?

SH: I mean, Diana Gabaldon knows exactly what she's doing. She has a great command of her vocabulary and the performance. She's involved with everything we do, and she always comes out with comments like that, especially via email or Twitter sometimes. She watches the dailies every day, and sometimes I will say something on set, you know, off the cuff or between takes, when the camera is rolling and she'll comment on it the next day, like, send me an email. [Laughs.] She's kind of part of the family.

Glamour: Does the Outlander tush require any particular maintenance?

SH: A strict diet of fried foods is key for fullness. [Laughs.] No, but I do tailor my workouts. There is something very physical about Jamie, and he is probably bigger than I would be in real life. Also, I just discovered the booty band, and well, you might find one in my bag. It really works.

Glamour: Has becoming this lustworthy leading man changed your life in any way?

SH: It has changed my life very much. And Outlander has been a terrific show to work on. We've been all over the world. We've just returned from South Africa, where we've been shooting for months.

Glamour: Jamie is so lovelorn. Has playing a guy who wishes his time-traveling wife could return made you more romantic in real life?

SH: There are many times when I think, Would he really do that? But that’s what’s great about Jamie. He’s so loyal; his love for Claire is something to aspire to. Things are more complex in real life, but I am a romantic. I like to do the best I can. But yes, Jamie sets a very high standard.

Glamour: Speaking of high standards, do you ever have body anxiety while filming?

SH: Jamie is described as the king of men, and personally I am far, far away from that. I’m a Scotsman. I love my whiskey and bad Scottish foods. All actors are insecure. And I’ve got my insecurities, which is why I go to the gym all the time.

Glamour: So the show is well loved for its moments of physical and emotional intimacy, many of which break from tradition and play to the female gaze. Has it affected how you think about romance or has it taught you anything about the art of seduction? Are you ever thinking of engaging in an act of courtship and kinda think, Oh, what would Jamie do?

SH: Diana has written this extraordinary character who is so endearing. I think this season is so special because it really is about them finding their love again. What do you do when the person you love has died or left your life and they return? How does that affect your life? I think Jamie's love has never really died.

Glamour: Has being in all these steamy sex scenes help you shed any personal inhibitions?

SH: Having to perform a scene like that in front of 20, 26 burly Scottish crew, you quickly lose your inhibitions. It isn't that sexy, really. You spend the whole day sort of partially naked and everyone's kind of sick of it by the end of the day.

Glamour: So is real-world sex disappointing compared with made-for-TV sex?

SH: Oh, absolutely. On Outlander we have the problem of figuring out how to shoot the characters undressing. In those times, women wore many layers and corsets; the men had buckles and layers. Foreplay was probably a lot longer in those days. It would likely take half an hour to get undressed, so we tend to shoot montages. I need to figure out a way to incorporate the sexy montage into my real life.

Glamour: This coming season, Jamie's charms, physical and otherwise, land him in a number of difficult and potentially life-threatening situations. What was it like to play this darker Jamie?

SH: The story line for Jamie is terrific. He believes he's going to die on the battlefield in the first episode, and he doesn't. He survives. So who does he become? He's now a rebel, he's a traitor, he's an outlaw, [and] he's living without the person he loves. 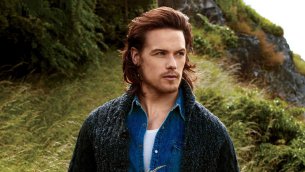 Article written by Elissa Strauss for Glamour in sept. 2017
Link to original: https://www.glamour.com/story/outlander-sam-heughan-doesnt-mind-if-you-objectify-his-fine-ass