I FELL IN LOVE WITH JAMES FRASER through Claire’s eyes; as the main narrator she describes him in such fine detail, I know the essence of the man….through Diana’s descriptive prose and my very keen sense of smell, I too could pick him out of a crowded room of men, simply by his smell……a mixture of coffee, whisky, gunpowder, horses and manure, his sweat…..the deep male smell of him. His long graceful bones, the way his mane of copper russet bronze and auburn hair, lifts in stray wisps about his face, because he is either fiercely animated, or like a lions mane, falling around his shoulders in the frenzied passion of love making.
The quirk of his mouth, his wry humour, courage, honour and accomplishments.
A unique talent for absorbing both people, learning and languages into his life.
A man of big passions, ferocious loyalties and all encompassing generosity.

I FELL IN LOVE WITH JAMIE through Claire’s eyes, until so deeply absorbed in the “more real than life” story, Claire fell away. I was Claire…..living, loving, breathing him in, waiting for him to return from battle, from hunting, from visits with neighbouring Cherokee or working alongside him, and healing him.

AND THEN I FELL IN LOVE AGAIN, through Roger’s eyes. Roger knows Jamie when he arrives at Frasers Ridge….Roger, the “dog with a bone” Historian, has been hearing Claire’s story, researching Jamie’s History…..Culloden, Ardsmuir, Helwater. He has already developed a relationship with Jamie, two hundred years before he meets him (Yes my mind gets tied in knots too)!!! Before Claire leaves Inverness for the second time, Roger finds her fast asleep in the Reverend Wakefield’s Study, clutching the Ardsmuir Prison Records to her breast, her heart….he has a deep affection for Claire, and says to her sleeping figure, and to the long dead Jamie, “I don’t know who you were mate”, he whispered to the unseen Scot, “but you must have been something, to deserve her.”

And then there follows the catastrophic mess, through Lizzie’s mistaking Roger for the monster who has violated Brianna…..we know what follows, and once the two men have come to terms with each other, something beautiful happens.

ROGER AS NARRATOR won me over in a completely new way. He sees Jamie from a very different perspective. There’s understandingly, in the beginning, lingering resentment, but that changes subtly to begin with, as the two men take the measure of each other. I’m often brought to unexpected tears, by Roger’s reference to Jamie as “the big Scot.”
Why should that make me cry??? I think it’s the knowledge of how much suffering that big body has gone through….and, for some reason those words are a trigger for tears.

Roger refers to Jamie’s “panther like grace”, he wants his approval, and can’t help the jealousy he experiences around Jamie. One vivid description is of Jamie standing back, eyeing Roger dispassionately, as though he were buying a bullock at the saleyards. This comes about when Roger asks him “Teach me to fight.” There’s some brilliantly witty dialogue that follows with Jamie telling Roger he had his first sword at five…..Roger had a toy train with a red engine at the same age. But Roger is equally stubborn, also a man of learning and finally a deal is made. He describes his first experience with “the art of the sword, with Jamie Fraser as his opponent, as like fighting a cloud.”

But Jamie develops a strong affection and respect for Roger, and during the Ritualised Ceremony of The Fiery Cross, when Jamie calls out to him, “Come stand by me, Roger Jeremiah, son of my house”, there is a fierce pride and a belonging, a love for his Warrior Father-in-Law.

There is too much to include here. Roger as Narrator, brings James Fraser to life, in vivid detail that naturally is completely different to Claire’s. A man’s observation that also at times is unemotionally clinical in his Historian’s viewpoint of Jamie.

I LOVED JAMIE FRASER EVEN MORE, viewing him through Roger’s descriptive narration. 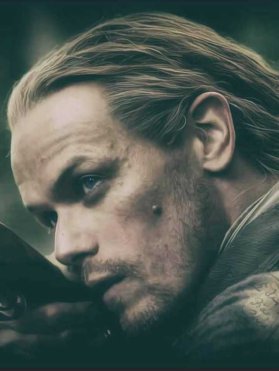 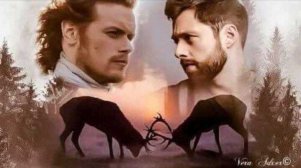 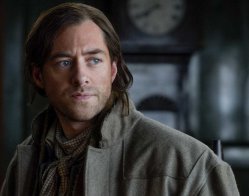