Sam Heughan Talks Us Through the Five Stages of Jamie's Sadness

Who is Jamie Fraser now? The man we knew from seasons one and two of Outlander has gone through a monumental shift after losing the love of his life, and in every episode of this season so far, he’s almost been a different character, with a new name and a new life. “I really feel like every episode has been a mini-movie,” actor Sam Heughan told ELLE.com, “and episode four is like Downton Abbey.” When we caught up with the actor in his trailer on the Outlander set in Cape Town, South Africa, he took us through his process of portraying Jamie Fraser as the Dun Bonnet (the rebel outlaw), Mac Dubh (the leader of men in Ardsmuir Prison), and Alex MacKenzie (the groom at Helwater). Yet while he may take on different guises, he's always a wanted man—in more ways than one.

Here, find out how Heughan took on the challenge of an ever-changing Jamie.

-Nice costume! Are those satin boots?

-Yes! It’s nice to be wearing something more genteel than a kilt. [Laughs]

-I disagree with you, actually! On screen, obviously, Jamie does age very well, but I could show you a list of everything we’ve done to him, everything the make-up artists have done. A little gray hair, prosthetics on my forehead, a little eyework. But it’s-For someone who is supposed to be 20 years older, you’ve aged well. more his journey, what’s happened to him, about what he’s gone through. It’s really hard to lose someone and find a way to go on. 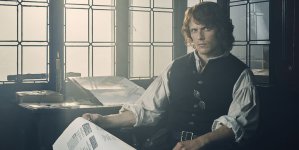 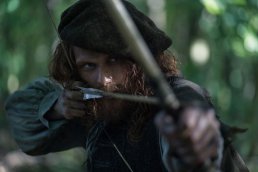 -From what I understand, you modeled Jamie’s journey on the stages of grief?
-Yes! It’s a whole journey in the first few episodes, where he comes to terms with the fact that Claire’s really gone, and finds a will and a way to live. He actually doesn’t want to be Jamie Fraser anymore, and so he creates all these different personas for himself, in each town, in each episode. It’s actually been fantastic. It’s been a real gift, this season. I wrote it down with the directors, all the stages of grief, and we tried to figure out where they all factored in.

-So the Battle of Culloden was the anger stage?
-Yes. It’s a great start to the season. He loses Claire, and he goes into battle, and I wanted to show him being cut a lot, and not caring. It’s almost like he’s committing suicide. He’s being very rough. There’s one scene, where he slashes a guy’s throat, and we were going to have it like he was smashing this guy’s head in with a rock or something, because he’s using the battle to take out his anger of losing her.

And then we go through his disbelief. That whole sequence after the battle where he’s hallucinating? He’s getting closer and closer to death, he’s bleeding out, and he sees Claire while he's in this dreamlike state. Rupert saves him, and the pain brings him around, but I thought, he’s such in a bad way physically, and with his grief, that he doesn’t want to live. But he’s so deteriorated that it hasn’t fully hit him. He’s just lost. The first time you really see him conscious, and wrestling with it, is when he’s hiding out as the Dun Bonnet. For me, that’s when he’s in the worst place. 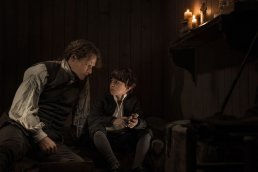 -He barely even speaks.
-They had it in the script that he spoke a little more, but I thought he shouldn’t. I felt like he should be very quiet. He feels like his actions have hurt everyone around him, and he doesn’t really want to be at Lallybroch. He had built a life there with Claire. He sees her everywhere. There’s one section when we see her appear in front of him, but I think that’s happening a lot. Everything reminds him of her. He’s in so much pain, he’s lost any form of communication. It’s a bit of self-punishment as well.

But when this thing happens to Fergus, he realizes that he’s got this family, and some sort of responsibility to them. Actually, there was a sequence, a fairly large sequence that got cut, where this Scottish Redcoat followed Fergus and found Jamie’s cave, and there was a fight. Jamie ends up drowning him in the river. And I kind of liked that, because we saw this other side of Jamie: this ruthless, feral side. He’s so used to living off the land, eating wild animals, and there’s now something savage about him.

"He actually doesn’t want to be Jamie Fraser anymore"
-He manages to connect with Mary McNab, though.
-He just needs some sort of human interaction that isn’t a reminder of Claire. And the way we shot it, he just can’t…He just closes his eyes, because he wants to shut it out. The best place for him, really, is prison. Which is why he’s more than willing to give himself up, to help these other people. He feels his life is worthless, so why not? But the whole time at Ardsmuir Prison is really hard for him, because he wants to just die in the corner, and yet he gains this status with the men, unwillingly. He doesn’t want to be a leader of men. He doesn’t want to have attention. But the men have this respect for him, and he does want to look after Murtagh. I feel like at this point, he sees what these men want, and he knows he needs to keep them going. So he’s found a bit of purpose.

-When he’s asked to translate what the wandering man is saying, his words give Jamie hope that Claire might have come back.
-He knows it’s madness, but he can’t help himself. He wants to hold on to her. He’s been talking to her, dreaming about her, thinking about her, and so he goes on this sort of fool’s errand, to escape to this island. But there is nothing there that he is looking for, although something else is there. And that’s when he’s like, “Oh, God. She actually is gone. She is not coming back.” That’s when he finds acceptance, ultimately. Which is great, because it means he can move on. And that’s really hard for someone to come to terms with. 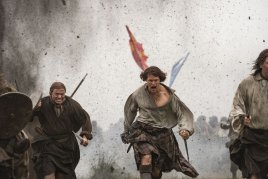 -So by the time we get to his adventures at Helwater, he’s moved through all the stages?
-Exactly. I wanted to play it like—before, he wasn’t sure what John Grey was going to do to him, because he still has a bit of Black Jack[–inspired] distrust, but then he sees what he’s been given. And he’s able to find some peace there. He’s back with horses, which he enjoys. After being all over the world, and being involved with history, politics, revolution, now he’s got a quiet life. He’s happy to be in the shadows serving someone else.

-Although serving someone else brings him into yet another woman’s bed!
-[Laughs] It’s a little complex! He’s not trying to replace Claire. It’s either done in finding solace, some sort of companionship, or, in Geneva’s case, because of blackmail. And then it means he has a child he can care for, even if he has to do it from afar. For him, having Willie is very rewarding. He’s always wanted children, always wanted to care for them, so it’s heartbreaking when he has to leave Willie behind. And in such a short amount of time to deal with it all! We literally only got one scene there. But he carries Willie wherever he goes now. At least there’s someone else there to live for now.