If there is a constant that runs through the work of Diana Gabaldon, it is the permanent state of war, or at least the presence of a domineering army.
Whether in the 20th century, when we discover Claire, a war nurse facing the Nazi invasion, or in the 18th century during British rule over Scotland, then in the North Carolina colonies, soldiers are everywhere as an eternal threat to the population.

But there is another more important constant, which I think is the very soul of this magnificent saga, is that neither Claire nor Jamie are fighting to assert any kind of domination. It is not by ideology that they join the fight, not even when they side with the Jacobites. Their primary design is not to allow any of the kings to settle on the throne, but to prevent a slaughter from occurring and a people to disappear.
And many years later, during their lives in the American colonies, they will not join the army of one camp and then the other to revolt or even to claim land that belongs to them! But again and again to support the oppressed and resist the injustice that is done to the people and to which they can not attend without reacting.

The author's tour de force is to tell us a story in which the army is omnipresent without hate, fury and death ever being justified and even less trivialized. In opposition to war and hatred, it is love and respect for life that it gives us to read, and it awakens in us strong emotions that allow us to define ourselves. 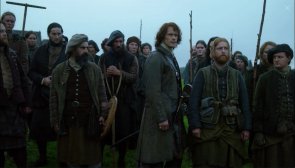 Love at the heart of the battle

War against the backdrop of the Outlander saga 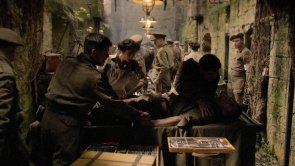 In the very first episode, then, as a reminder in episode 9 of season 2: I'm ready, we understand very quickly that if Claire engages in the British army, it is not to make war but to heal, repair and keep alive. That's why she's fighting and struggling.
It will be his destiny, wherever it may be, at any time.

We feel no anger in her, no desire to fight except death! She bears such benevolence in her that every person she meets becomes important.
It reminds me a lot of Mel Gibson's 'Do not Kill' movie that tells the true story of Desmond Doss who wanted to participate in the war effort despite religious beliefs that forbade him to hold a weapon. Yet he saved dozens and dozens of men by caring for them and tearing them away from the fires of the enemy army.
Claire does the same, she confronts the war, but does not make an accomplice. 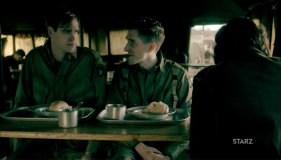 The soldiers she meets, Corporal Grant, and Lucas first class are immediately endearing to us because she makes us think of them as men and not just as soldiers. Therefore, immediately, their life is infinitely precious and it is also intolerable for us to see them both die, that it is intolerable for them not to be able to save them.

It is all the more terrible for her, that finally returned to peace with her husband, the destiny returns it, certainly, near the man whom she will love madly, but in time of war, still and always. Moreover, the first people she crosses after crossing the stones, are these red tunics, invading, domineering, all powerful.
She, the former nurse of the British army, becomes the enemy of the forces that at other times she supported. And this is the absurdity of the war when you position yourself not as a soldier but as a civilian.

And then she meets him this man for whom his heart will never stop beating. This soldier, as she calls him, but who, like her, is only by duty and not by conviction. Immediately he detaches himself from his companions by this absence of aggressiveness and desire for domination. He shares with Claire the respect of life, and even though he has already killed and will kill again, he will never be seen to be angry or flippant. 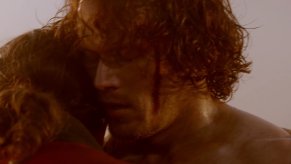 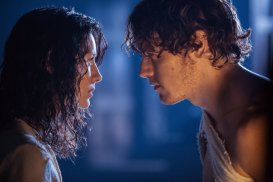 And then Jamie learns from Claire, because he has that compassion in him that allows him to match with his warrior nature and military background. Of course, he fights, defends himself. He kills, and still kills, because it is war and the life of his clan depends on it. He kills because otherwise his country will be finished. In a way, it is death that kills.

The war rages on and then passes like a plague. Men fall by the thousand, why?
For Jamie, nothing makes sense except perhaps this death dance on the moor of Culloden, with his executioner who must also disappear. If not, what good is all this?
Perhaps this death will be able to recover from its fundamental meaning, the absurdity of the piling up of Scottish corpses strewing the field of battle.

And while Claire has returned the stones, safe from a time without war where she will be half alive, Jamie suffered the fallout of the defeat.
First of all as a fugitive whose life no longer makes sense, then as a prisoner, who will regain a taste for life by caring for others. Because that's what Jamie does. He beat and did not destroy.
Rather than eliminate those who oppose him, he brings together those who want to build something. This is the antithesis of war. And that's what domineering armies want to fight and destroy.

The years go by, the episodes go by and here we are in the British colonies of North Carolina. The country is setting itself on the organized massacre of the natives. Settlers flock from all over Europe. English, Scots, Germans, French, most to flee war and oppression in their own countries.
The colonizers shape the territory as they wish, hunting and slaughtering the Indians, legislating slavery as an inalienable right, manipulating the settlers by giving them land under conditions, weakening them with infernal taxes, thus keeping under control any uprisings , publishing more and more drastic laws to justify their supremacy.
The war is there, underlying, brooding in the very heart of the new world ... as if the man carried within him the seeds of his destruction.
So Claire and Jamie again have to take sides and it's terrible because it goes against their desire for life! 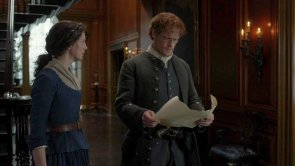 For those who have not read all of Diana's books, I stop there, while of course, throughout her story the war continues, amplifies, invades and confiscates the lives she disintegrates. on his way.

But what we finally remember is not so much the heaped up dead, the lives sacrificed, nor even the appalling propensity of the human to eliminate his fellow beings! No, what we remember is that nothing would make sense without love in the foreground.
If love persists in the war, then, no matter how many deaths, life is saved.
The love of Jamie and Claire is the only real bulwark to the warlike domination and that is where the hope lies.

Their friendship with the Indians speaks volumes about their ability to respect and be respected, and we dream for them that the rest of the world will forget them so that they will finally live in peace in a nature they love and protect. . But they are gregarious and feel responsible for all those who live around them, so again they take up arms.