Animals
of the saga 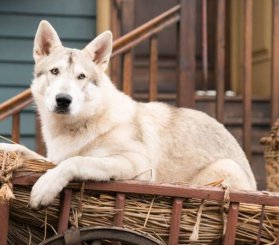 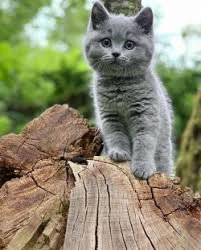 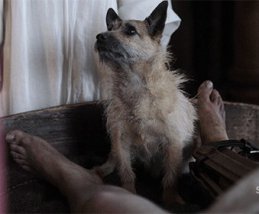 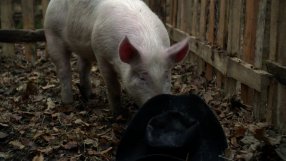 - It's a dog, that? I had asked one of the waiters the first time I saw Button passing on the heels of his mistress.
He waited patiently for the little corkscrew tail to disappear into the next room before answering doubtfully:
- It seems. Well, that's what Mother Hildegard is saying ... No one would dare to contradict her.
As the days went by, I heard various opinions about Button from sisters, waiters, and visiting doctors. Nobody knew where Mother Hildegard had found it, let alone why she had kept it. He had been on the staff of the hospital for years, and in the all-powerful eyes of his mistress, enjoyed a much higher status than the sisters, on par with the doctors and volunteer apothecaries.
Among the latter, some of them were averse to him, others regarded him with amused mistrust. When Mother Hildegarde had her back turned, one of the surgeons called her 'the dirty rat', another 'the stinking hare'. A little manufacturer of bandages called him almost openly 'Monsieur de la Serpillière.' For the sisters, he was a kind of mascot and totem; as for the young priest of the neighboring cathedral, who had been bitten his calves several times while coming to administer the last sacraments, he confided to me that he considered him one of the lower demons, disguised as a dog to serve as blacks. designs.

- These beasts are ferocious! I insisted. They can open your throat in the blink of an eye.
Unimpressed, Jamie squats to examine the animal.
- It's not really a wolf, is it? he asked with an intrigued look.
He put a soft hand toward the beast, inviting him to sniff his fingers. I closed my eyes, expecting the worst. Hearing no cry, I reopened them. Jamie was inspecting the wolf's truffle.
- Beautiful beast ! he concludes, scratching familiarly with his skull.
The monster narrowed his yellow eyes. Was it pleasure or, what was more likely, anticipated enjoyment at the thought of tearing Jamie's nose off?
'She's bigger than a wolf,' he added. Her chest and head are wider and she is much higher on her legs.
'His mother was an Irish wolf-dog,' Ian explained tenderly.

He knelt beside his uncle, talking to him with enthusiasm while scratching his gray head.
- ... She ran into the woods while she was in heat and she came home fat.
- Oh I see…

Jamie mumbled tender words in Gaelic caressing the big hairy paw. Each of his curved claws was at least five centimeters long. The creature reached out his muzzle, eyes half closed, bristling the thick fur of his neck.
At my side, Duncan raised his eyebrows dismally and gave an annoyed sigh. Duncan was not a friend of the beasts.
- Jamie ... I started.
He did not hear me, too busy spoiling with the beast.
- Balach Boidheach. That's a good big dog!
- Can we know what this thing is going to eat? I asked, forcing the voice.
This argument hit home.
- Ah! he said.
He looked at the yellow-eyed dog with regret and rose slowly.
'Your aunt is right, Ian,' he said. We do not have enough to feed him.
- This is not a problem ! Ian replied. He is used to feeding himself.
- Here in the city? I exclaimed. What's he eating, little kids?
Ian gave me a vexed look.
- Of course not, my aunt. Fishes.

(Volume 4: Drums of autumn - extract)
In the early morning, Ian slept deeply. I took advantage of it to take a little rest, rolled in a ball on the floor, until the sound of the Clarence mule woke me up with a start.
As a gregarious animal par excellence, Clarence welcomed all that she considered a friendly creature, this category covering almost everything that was on all fours. She then manifested her joy with a shrill voice that echoed throughout the valley. Rollo, furious at seeing himself supplanted in his role of guard dog, jumped at the foot of Ian's bed, jumped at me and plunged through the open window like a werewolf.

He hesitated again, reluctant to break the charm of this magical place. Suddenly, from the corner of his eye, he saw a tiny movement on his left. He leaned forward, squinting to peer under the dark branches of a holly bush. Motionless, Jamie blended perfectly into his earthy environment. Without his keen hunter's gaze, he would never have seen the animal. It was a tiny kitten, her gray fur bristling like a milkweed flower, her enormous eyes wide open, fixed, almost colorless in the dim light.
Jamie slowly moved a finger toward him.
- At Chait. What are you doing here alone?
A wandering cat, he was probably born of a mother who had become wild again after running away from a hut of settlers. He grazed the soft fur of his chest and felt so small teeth sink sharply into the flesh of his middle finger.
- Ouch!

(Volume 5: The fiery cross - extract)
The sow gave birth in the pantry. She had at least twelve pups, all in good health and with a strong appetite. As for us, we are forced to tighten our belts because it fiercely attacks anyone who approaches his refuge; she roars and gives teeth. I had to settle for an egg for dinner and was informed that I would have nothing until I resolved the situation.

Dougal, not without having grumbled at the expense, had procured me a new mount. He was a big horse who, for want of elegance, had a soft look. I baptized him Thistle
...
Donas meant 'demon' in Gaelic and the horse in question deserved his name. He had a box deep in the stable, slightly apart from the others. It was a huge chestnut stallion with an indomitable temperament. Nobody had ever climbed it and only old Alec and Jamie dared to approach him ...
... Donas was not gregarious and showed him well. He bit the first hand that tried to grab his reins. Then he rushed, sweeping the air with great hoofs, sending some intrepid men on the ground who immediately fled. 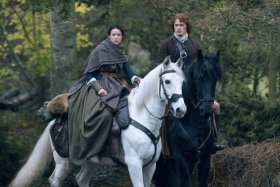 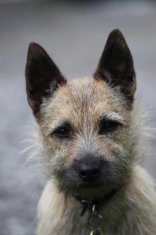 She (Mother Hildegard) had to travel miles during the day; yet she never seemed to be in a hurry, and walked the common rooms with regular strides, which made a good meter, her little white dog, Button on the heels.

The latter had nothing of the Bichon Frize and other Pomeranian loulou so prized by these ladies of the Court. It looked like a cross between a poodle and a dachshund. He had a thick coat and ran all around his bouncy belly and along his short arched legs like a Louis XV armchair. His toes spread out and speckled in black rattled on the gray slabs, while he trotted behind Mother Hildegarde, her pointed muzzle against the hem of the wide black skirt.

In spite of the somewhat excessive character of this opinion, the priest might not have been quite wrong. Indeed, after observing the strange couple for a few weeks, I came to the conclusion that Bouton was none other than the bad angel of mother Hildegard.
She often spoke to him, not as one speaks to a dog, but as one consults a colleague on a serious subject. When she stopped at the bedside of a patient, it was not uncommon for Button to jump on the bed and sniff the terrified patient. Having finished his inspection, he sat down, usually on the legs of the person concerned, raised his head towards his mistress and waved his tail in the form of a question mark, seeming to await his diagnosis. What she never failed to give him. 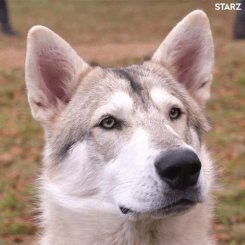 Ian did not listen to him anymore. He had arrived in front of a half-collapsed post, at the foot of which was tied a rope. He turned to us and pointed to the 'thing' attached to the end.
- You see ? It's a dog, he announced.
I took a step behind Jamie, gripping her arm.
- Attention, Ian! I cried. It's not a dog, it's a wolf! A big wolf. You better go back before he tears you a half buttocks.

The wolf leaned nonchalantly in my direction, gave me a disdainful look, then turned away as if I did not exist. He was sitting on his hindquarters, panting. His big yellow eyes stared at Ian with an intensity that could be seen as devotion to anyone who had never seen a wolf in his life. Which was not my case.

Seeing three skeptical faces turned toward him, he dropped to his knees and, taking the dog's mouth in both hands, he opened it wide.
- That's right, Uncle Jamie! I swear to you ! Feel a little breath!
Jamie glanced dubiously at the double row of sparkling fangs and scratched his chin.
- I ... uh ... I believe you on my word, my boy. Please, pay attention to your fingers.
Ian let go of the animal's mouth, which closed in a snap, throwing a little saliva on the dock. He wiped his hands on his panties, looking delighted.
'Do not worry, Uncle Jamie,' he said happily. I was sure he would not bite me. By the way, his name is Rollo.

He hastily withdrew his hand and examined the drop of blood that was beading on his finger. He glared at the kitten, but he was content to watch her without trying to escape. Jamie thought for a moment, then made his decision. He dropped the drop on a leaf, an offering to the spirits of places that, apparently, had also decided to give him a present.

On all fours in the grass, he extended his hand again, palm up. Very slowly, he stirred one finger, then another, then another, like a wave of seaweed under the water. The big pale eyes stared at the movement, hypnotized. Jamie smiled as he saw the miniature tail twist on all sides. If he could catch a trout with his bare hands, it was not a kitten that could resist him!
Between his teeth, he uttered a sort of hiss, like a distant chirp. The kitten looked at him, fascinated, while the gently undulating fingers approached imperceptibly. 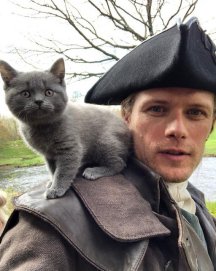 When they brushed his fur, he did not flinch. An index slipped slowly under his belly, an inch under the cold pads of a paw. He allowed himself to be gently hanged in one hand and lifted off the ground.
Jamie held him against his chest, caressing his silky jaw with his finger, his translucent ears.

The kitten closed his eyes and began to purr ecstatically, whirring in his palm like a roar of distant thunder.

- So, do you agree to come with me or not?
The animal did not object, he opened the collar of his shirt and placed it against his skin. The kitten trampled his ribs and then wrapped against his warm belly his inaudible purring reduced to a pleasant vibration.