If it is a subject which makes cast some ink among the fans of saga Outlander, that they are the readers where the viewers, it is definitely that of Jamie's ghost aparaissant under the windows of Clear while this last is still in 1945 and what it not connait the existence.
I gathered some texts hunted out to the liking of my reading here and which I altered so that there are not too much redundancies. Also I cannot credit this or that site, nor this or that author. Some of hypotheses come of discuss forums, groups, French, English or even Portuguese and others finally of my own cogitation.
It is necessary to know that this subject returns on social networks vicinity every 10 days, it is to say if it is far from being rounded off! And that's why I decided to devote him a particular page.

The Ghost of Inverness

Upon arriving in Inverness, Frank explains to clear that some ghosts can walk the streets, with good or bad intentions. And that, as the date of Beltane approaches, they should be careful if they approach a cemetery.
Subsequently, while returning to the pension one evening of rain and wind, Frank surprises a man under the window watching clear to brush his hair. Frank describes him as a tall, Scottish man wearing typical clothes including a sporran and a beautiful brooch holding the tartan on his shoulder. Frank's description of the spit with a deer is very similar to that of Jamie.
Because of this man's attitude, Frank thinks he could have been a soldier who met Claire during the war, and with whom she could have had a relationship. However, he confides in clear that when he came across, he was so close that he should have felt it but that was not the case. It puzzled him so much that he turned to look at him, but he had already disappeared. He also noticed that despite the strong wind, neither the kilt nor the tartan moved.
In the saga, he is therefore described as a ghost and is never mentioned again.

The mystery of the ghost

After being questioned by the readers, Diana Gabaldon revealed that the ghost in this scene is Jamie and has stipulated that the mystery would be revealed in the last scene of the last book of the saga.

However, in the first few days of filming, Diana gave Sam Heughan and Ron Moore (the producer) some details, including the reasons that make this scene sad. We will know nothing of these revelations except that the ghost of Jamie is 25 years old at the time of this apparition.
In the television adaptation, it is easy to understand that the ghost is Jamie, because he has the same clothes and the same posture. Moreover, in episode 8 of the first season, the portrait-robot that Frank entrusts to the police has the face of Jamie.

A) an imminent death experience after Culloden

After the Battle of Culloden Jamie was seriously injured and may have an imminent death experience or died for a few minutes. He was 25 years old on that date since he was born on the 1st but 1721 and that the battle of Culloden took place on April 16, 1746. So it is the age of the ghost.
This impending death experience could also explain Jamie's ability to see the future in dreams as we are told later in the saga.
It is said that those born to Beltane, like Jamie, have special powers that could justify their extracorporeal skills.

B) The time loop

The presence of the ghost looking clear that night, a few days before it travels back in time, may indicate that everything is a cycle.
Jamie's soul travels after her death to take care of Claire, until they meet again.
This hypothesis would explain the presence of the flowers at the feet of the stones of Craig Na Dhun who make return Claire to study them. It would be Jamie, who of course knows Claire's attraction for these flowers, who would have placed them at the stone's feet to make sure she came back and that she would make the trip well, again and again.
Diana Gabaldon said recently that these forget-me-nots were indeed of great significance. However, she denied the idea of ​​a loop, stating that the time in her story ran in a linear fashion and that events only happened once. 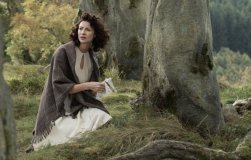 C) The promise of Jamie

Diana has said many times that Jamie can not travel back in time and that her only way of being with Claire would be in the form of a ghost.
In the first book, during the wedding vows, Jamie says, 'I give my spirit until the end of our life.' So, if one of them dies before the other, his spirit will stay with the other
In the second installment: The Talisman, Jamie swears:
'- I'll find you again, even if I have to endure two hundred years of purgatory, two hundred years without you, it will be the punishment for my crimes: for lying, killing, stealing and betraying.'

If he keeps his promise, that's what he does, after his death, he waits for 200 years to find her in Inverness so that their destiny crosses again. 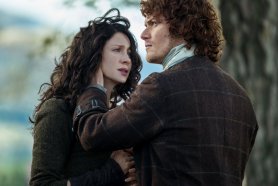 Beyond all these theories, we can still ask ourselves a question:

How is it that Claire, who seems endowed with a great memory and a keen sense of analysis, has never made the connection between Jamie and the ghost seen by Frank? How is it, especially, that she did not immediately make the link when she saw, for the first time, the spit of the fraser?

We can not deny the importance of this revelation! First of all, is it a coincidence that Otter's toothpeak appears on a stormy evening, just like Jamie's ghost in Inverness?
Otter tooth, we are told, went through the stones to warn the Mohawk people of its future extinction. He tried, until his death, to reverse this terrible fate. In vain. That's why her ghost appears to Claire, because she may be able to do what he has failed.
If we know what Otter's tooth meant, we do not know what Jamie's ghost (who, unlike Otter's tooth is not a time traveler) had to say to Claire. Did he come to ask him to cross the stones of Craig Na Dunn to straighten out the past? Is it he who planted the forget-me-nots at the foot of the stones so that it is there at the right time?

Upon arriving in the past, Claire saves the Highlanders group from an ambush by the red tunics by informing them of their habit of standing on the crest of Cocknammon Rock. Then, she heals Jamie from a gunshot wound that would surely have been infected if she had not been there and probably would have been fatal.

From the outset, Claire changes the story and it can not be a coincidence either. One more day and Jamie was no longer in this world! But if he is no longer of this world, he can not know Claire's existence, and therefore can not come to haunt her at Beltane's evening in Inverness in 1945.

The loop does not loop.
Not yet 😊

In the final episode of Season 4: 'A Man of Honor', Claire, Jamie and Little Ian meet Wahkaiiosta, one of the women of the Mohawk clan, who wants to recover the otter tooth stone that Claire wears around her neck .
Claire tells how she met the Otter's tooth ghost on a stormy night when she had just found her skull next to the stone.
She said, 'I believe that spirits exist only when there is something to remember, a story worthy of being told or a message worthy of transmission.'

(Theory mentioned by Lucie Bidouille - Attention, spoiler up to volume 6)

We know for certain that:
1/ It's Jamie's ghost. Diana confirmed it;
2/ Diana said Jamie's ghost looks 25 years old;
3/ Frank saw the ghost;
4/ It's not the same as the dreams that Jamie has about the future.

But what if the ghost and the dreams were still linked?
The most common theory (and the most "logical"—if you consider there may be any logic to it—) is that Jamie's ghost came from some sort of near-death experience when he was wounded on the battlefield of Culloden. Jamie's age indeed matches the ghost's appearance.
However, we know that a fortune teller made a prophecy to Jamie: "You will die nine times before finding rest in your grave." (volume 6) Jamie and Claire even do the countdown at one point. We have the ax to the head, the flogging, the torture by BJR, Culloden, the Laoghaire gunshot and the snakebite and maybe others.
And if with each "death", a part of him went on a ghostly journey, without his remembering it? So, in Culloden, his spirit would have gone to see Claire. But also, during another "death", he would have traveled to Claire again, seeing her writing under electric light. Another time he would have seen Brianna and placed a kiss on her birthmark behind her ear. And finally, he would have gone to see Bree, Roger, Jem and Mandy in the future.
But he has no memory of it when he comes back to life, and it would only come back in dreams. For example in the moments of his life when he would need it the most… During his "travels", he would have been visible only once, because that night was special: it was Samhain.
This trip, he will only dream of it at the end of volume 10, probably when his real death will occur, in order to show him that he can leave in peace because his Claire will come back to him...
It's a way to link 3 mysteries surrounding Jamie: his "prescient" dreams, his ghost and the prophecy of the 9 lives of the fortune teller...