The different names of Jamie

If there is one fact that no one can contradict, this is how swarming Diana Gabaldon's saga is, with diverse and varied characters, breathtaking twists and detailed information.
Although the author regularly takes the trouble to recall a few previous facts to help readers find their way around, it is still advisable for the latter to keep an eye on things and sharp focus.
For example, the number of nicknames with which our dear Jamie is decked out throughout the saga.
Here is a non-exhaustive list that I invite you to complete in the comments. At the very beginning of the adventure, while he rides alongside Dougal and his men, it is a wounded and ragged Jamie and especially whose head is put at price, that Claire meets, and who bears the name of Jamie MacTavish.

A nickname that allows him to live quietly within the walls of Leoch, sheltered from the red tunics that seek him to hang him. But of course, for her marriage to Claire to be official, Jamie has no choice but to reveal the full name.

An extended name in which he will occasionally draw to provide identities better suited to the situations he encounters. 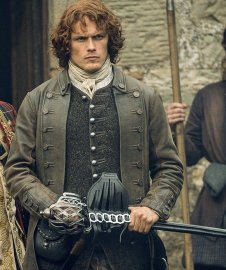 When he has just extracted Claire from the ardor of the villagers of Cranesmuire who wanted to burn her as a witch, Jamie finally comes back to his dear Lallybroch whom he left 4 years ago.

Believing that he was safe from British ardor thanks to the Duke of Sandringham, he finally returned to his field as Lord Broch Tuarach.

We learn at a particularly touching moment that during his childhood, Jamie’s brother named him Sawny, which means Alexander in Gaelic. This is the name written on the wooden snake that Willie had carved for his brother and that Claire gives to Jamie just before he is captured by the English and locked up in Wentworth. We are now in Paris far from British supremacy. But Claire and Jamie did not cross the Channel for a French vacation! No, they are there to defeat the future Jacobite uprising, nothing less than that!

It is also in Paris that they will meet Fergus, who was then only a very young boy. They take him off the street to take him in their service and adopt him.

However, no matter how much time passes, whatever the undeniable attachment between Jamie and Fergus, the latter will not stop calling him Milord. Despite the efforts made, the Jacobite revolt will take place. The Fraser people have no choice but to participate because Prince Charles has officially declared Jamie's allegiance to his cause.

From then on, he was considered a traitor to the crown and was nicknamed by the British: Jamie the red. As history had announced, the Jacobites were defeated on the Culloden moor.

Jamie, despite his desire to die, is still alive and hides in a cave on the land of Lallybroch, like a Hermite. To hide the red hair that made him Jamie red, he wears a beret and becomes Gray hat. In order to free the inhabitants of Lallybroch from the suspicions hanging over them, Jamie decides to indulge in the English. He is imprisoned in Ardsmuir with the few surviving Jacobites.

There, he is nicknamed Mac Dubh (pronounced Mac Dou) which means 'son of the black' in reference to his father, Brian, whose legend says that he is a selkie, or 'silky', it is that is, a seal that came to earth to marry a human.

Thanks to Lord John, Jamie was not deported to the American colonies with the other prisoners from Ardsmuir, but found refuge in England as a groom in the Dunsany family estate, Helwater.

The Dunsany son who died in Culloden in the British army, Jamie, follows Lord John's advice and introduces himself as Alex Mac Kenzie. For a little boy like Willie, Mac Kenzie is too long, too complicated, too impersonal.

While Mac is shorter. We find Jamie a few years after his departure from Helwater. Wars and deprivation are behind him. He lives in Edinburgh where he seems to lead a peaceful life as a printer and to do so, he has taken on the name of Alexander Malcolm, which are his middle and middle names.
A pseudonym which has its importance since it is thanks to him that Roger will find his trace since the 20th century.

Now is the time for meetings. Brianna joined her parents in seventeenth-century America to warn them of the announcement of their death in a fire. She adapts to the life of Fraser’s Ridge and gets to know her father whom she does not manage to call dad, so as not to betray the memory of Frank. Jamie then offers to call him Da.

Is this a Gaelic name? Bree asks him. No, it's shorter, it's simpler, he replies. The Fraser family finally settled on their land in the hinterland of North Carolina. They demarcated their land, planted their stakes and started the foundations of their future house. Everything seems to be going well, even if their relationship with the Cherokee Indians is still a little fragile.

But now Jamie overcomes Tskili yona (the mad bear) who terrorizes the tribe and brings them the remains as a sign of peace. He will now be known to the Cherokees as Yona Dihi, which means, Bear Killer One of the peculiarity of Jamie is that he does not have the same name according to the people who address him. As his former Ardsmuir companions continue to call him Mac Dubh and Fergus sticks to a Milord, his nephew young Ian never forgets to recall the blood tie that unites them and therefore calls him: Uncle Jamie . Although nothing makes Jamie want more than living in peace on his land, war is again on his doorstep and everyone is waiting for him to resume his leadership role. Thus he found himself at the head of a colonial militia on behalf of the British army and thereby became Colonel Fraser.