The dress
red
A symbol of femininity?

Ah, Claire's famous red dress, whether we like it or not, we are forced to admit that it is often - along with the one of the wedding - the most beloved dress of the fans. This is also the one whose replicas sells best on home-made sites. But why ? Yes why this craze around this dress, and more specifically around red dresses in general?

THE RED DRESS IN THE BOOK OF DIANA GABALDON

(Volume 2: The talisman, Chapter 9: The splendors of Versailles)

It is important to note that in Diana Gabaldon's novel, Jamie recovers from his rape by Jack Randall much more quickly than in the series. Also, Claire and he are again very intimate when this passage of the red dress occurs.
Here are some excerpts:

'I closed the door of the little salon behind me and remained for a moment motionless, gathering my courage. I tried to catch my breath, but the narrowness of my whale corset turned my expiration into a little muffled hiss.
Jamie lifted his nose and stood there, widening his eyes (...).

- Do you like it? I asked, spreading my train behind me with a clumsy kick.
I walked into the room, voluptuously waving the hips as the seamstress had indicated, to highlight the faulty gussets of the skirt.
Jamie finally closed his mouth and blinked several times.
- It's ... uh ... it's red huh? He observed.
- Let's say 'blood of Christ', I said. This is the most fashionable color of the season, finally according to my seamstress.
'A bold color is not given to any woman, Madame,' she muttered, her mouth full of needles. But with your skin! Lord Jesus! The gentlemen will crawl under your skirt all evening!
- Let them try a little and I will crush their fingers under my heels!

However this was not the desired effect, although I was planning to point out. (...) Louis XV had remembered the appearance of Jamie at his rising and had been invited to a party at Versailles. For the occasion Jamie had wanted me to make a dress that does not go unnoticed. It was served.
I need to get the attention of the men who control the money, he explained to me a little earlier. Now, having neither a high rank in the French aristocracy nor a position of power, I must make sure that they seek the company in one way or another.
(...)

- The nobles are interested only in appearances. So to start, you have to present them some interesting things to watch.

Judging by the dumbfounded look now on his face, I understood the instructions. I strutted a little in the room swirling around me the huge basket skirt.
- Not bad huh ? I asked. And anyway it catches the eye!
He finally found his voice.
- Does she catch the eye? if he rebelled? Do you call it 'attracting the eye'? You are practically bare chest!
I lowered my head to check.
- You exaggerate ! It's not my skin that you see under the lace is an ivory satin lining.
(...)

He approached leaned forward to take a closer look at the tight bustier of the dress. Then he looked down into my plunging cleavage.

It is even stated right after that 'in terms of getting attention, the dress was an absolute hit. In contrast, Jamie's blood pressure took a hit. '.

In the book the dress is clearly an instrument used to attract the attention and therefore the attention of some important people. Although this is not explicit in the series the result remains the same (the behavior of Mr. Duverney and the look of Louis XV in the series speaks volumes). However in the series I find that this dress makes even more sense as we will see it now. 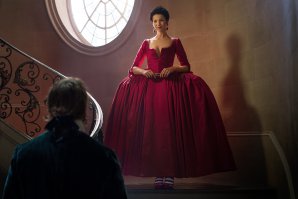 First meaning of the dress in the series: the independence of Claire. As she tells Jamie on the stairs, she drew it herself. It may seem trivial but in reality, it implies that she takes her life in hand.
Indeed, since her arrival through the stones of Craigh Na Dun, she first lived as a guest to Leoch (or even a prisoner).
Then, while being the wife of Broch Tuarach's Laird, she lived in the Lallybroch estate under the guidance of Jenny, who had been in charge for years.

Also, in the house of Jared who, certainly, does not belong to them, but where she is invited to be officially the mistress of house, she can finally make the decisions, and that begins by choosing her own clothes.

Then, the fact that she drew a dress of this style perfectly illustrates her desire to develop her femininity in Paris. This will surely go with the desire to seduce her husband who, although undeniably in love, is still traumatized by the events of Wentworth and is struggling to find the path of his physical intimacy with his wife.
Note this sentence Jamie says a lot on the subject: 'Sassenach first your pretty pussy, now? '. 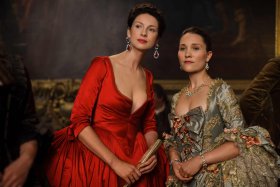 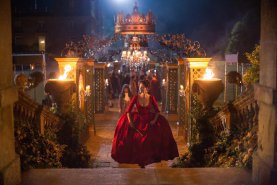 Finally, although it undeniably attracts attention because of its daring cut, Claire's red dress is however much simpler than the dresses of the time, as can be seen in the photo below: no embroidery , lace, frilly. She is modern and self-sufficient since Claire does not even wear a necklace.
One clearly feels the mix of styles of the eighteenth century and the 40s that Terry Dresbach, the costume designer, often puts forward during this season 2. Indeed, following the Second World War women want to move forward and this is reflected in fashion. They find their femininity by wearing dresses with unveiled shoulders, with U-shaped necklines and whose length reaches above the ankles. The dress of Claire arriving at the ankles and having a pronounced décolleté, we are well in sartorial characteristics of its time adapted to the eighteenth century.

SOME OTHER EXAMPLES OF FAMOUS RED DRESSES

This color has been used for textiles since antiquity. It is, with white and black, one of the three most used colors in history in terms of dress.
It's no secret that red is the color of passion, of love, of elegance, of action, but also of provocation, prohibition and sin in some societies (the red being the color of the blood). It is therefore not surprising that Claire chooses a red dress to seduce, assert herself and reveal her femininity.

Sociological studies have shown that a man was more easily attracted by a woman in red. Also according to this study, the red dress and the lipstick being the two elements most appreciated by these gentlemen.
This is certainly why the red dress has its place in many movies and TV series, and even becomes iconic in some cases.

Here are some examples, maybe you could find more!

Hermione (Harry Potter and the Deathly Hallows 1) and Louisa (Me Before You) reveal their femininity, their elegance, and move from being a girl to being a woman wearing a red dress. 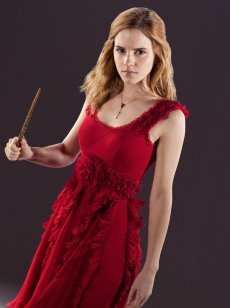 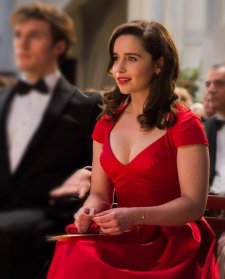 Many other red dresses have become unavoidable, among which are:
Satine in Moulin Rouge, Grace in Gangster Squad, Tina in The Mask, Lorelei and Dorothy in: men prefer blondes, Joëlle: in Frimousses' Funny, Jessica Rabbit in: But who killed Roger Rabitt, Scarlett O'Hara in: Gone with the wind

Vivian (Pretty Woman) brings out her elegance and class with this sublime red dress at the opera, Edward Lewis and all the staff of the hotel are left speechless. Note a resemblance between Vivian's dress and that of Claire, Julia Roberts's necklace here replacing the earrings worn by Caitriona. 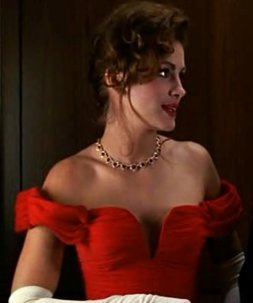 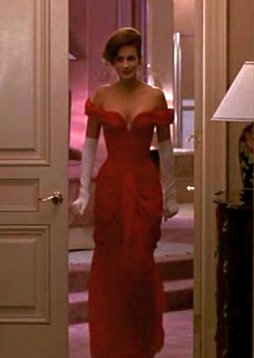 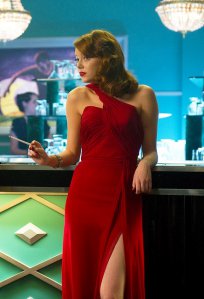 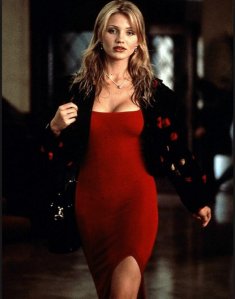 And you ? What do you think of red dresses in literature and cinema and more specifically that of Claire?