Roman Berrux is a bilingual French actor born August 31, 2001
He started very early in the cinema since at the age of 5, he gave the reply to Marc Lavoine, Jean-Pierre Daroussin and Gérard Darmon in the film by Marc Esposito: The heart of men 2.
He then starred in several TV movies and series and stood out as the French voiceover of Kirikou in Kirikou and men and women.

In 2016, he perfected his English language by enrolling in the bilingual interpretation workshop of the Paris school of dramatic art.
About her participation in the Outlander series Diana Gabaldon had answered a few questions.

How did Outlander's adventure begin for Romann?
- It was a bit of a coincidence because he had never played in English. He was offered to audition and he tried the part. He just read part of the books to better understand the character of Fergus.

Did the production ask him to keep his French accent?
In fact, the character spends a lot of time in Scotland so his accent changes. It's the same for Romann Berrux who has improved over time.

Do you have a filming anecdote?
Scott Kyle (who plays Ross) is nicknamed 'fireman' by the rest of the team, so he made him believe that he was a firefighter and that he had already saved a whole family from the flames. Romann Berrux believed him, for him he was a hero, and finally he learned that this nickname was just due to the fact that he is a strong man.

Romann, meanwhile, remembers the bad weather in Ecoassais and the good times spent with Sam Heughan. 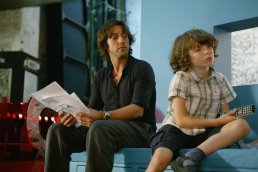