I stared at this scene as I stared at these 2 heroes from another time.
The battle has already started, Jamie throws himself headlong alongside his godfather and the other companions. The blows rain, the muskets fire, the powder escapes leaving a grayish sky, the blades dash, fall and collide against the moving bodies.
And there ... in the middle of the horses, under the charge of the combatants, Jamie LE sees him, his torturer, his executioner.

The sky, yet loaded with ashes, lights up on Jamie's gaze, a look of 'deliverance', finally being able to finish what he had started in Paris, his duel ...

Because BJR knows it, he has not forgotten this famous phrase which was sneaked into his ear by Claire at the prison, whispering the date of her death. And here we are ... No one can forget such an announcement: the date of his death.
We believe it or not, it remains etched in memory.
so, since this day is supposed to be his last day, he will end it with HIM, his Jamie, the one he never succeeded in bending, the one he nevertheless tortured in all possible ways, which he dreamed of owning.
Paradoxically, they throw themselves on it like you throw yourself in your arms when you find a friend, a brother. The dance begins, they slip away, the blades speak, the blood spurts, the forces diminish on both sides and in a last burst, finally stick together, BJR falling on Jamie who barely holds him back. They will fall TOGETHER for their last eternal journey.
Failing to have had the soul of Jamie, BJR will have his death he thinks probably before exhaling.
No! His dead body placed on Jamie will allow him to survive, when he wanted to die. This carnal duel has ended. This episode is therefore a real dance for me for several reasons:
first, the scenes pass tirelessly from one era to another, from one life to another, from events as strong as the murder of Dougal to the so sad stroll of Claire in her memories in the XXth century
On the way from the couple's separation to Craig na dun, Claire and Jamie are embraced and to get to the stones, they start like dance steps, turning on themselves.
Finally, this duel which one could almost say 'fratricide' between 2 soldiers, 2 warriors, can also be considered as a dance, that of Death.

How to watch this episode 'the battle joined' without thinking of a dance, a dance that I would call the Dance of Death.
Indeed, this episode features the character essential to this whole saga: the famous battle of Culloden. It is the flagship event that marks the separation of the star couple from the series. A separation that the spectator thinks final, eternal. Here they are immersed in 2 worlds, two eras that everything opposes.
While Jamie thought he was going to die on this battlefield, he found his longtime enemy, Black Jack Randall, proud in his uniform as Captain of the Dragons. 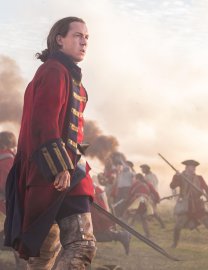 In turn, the mad captain turns and crosses the stature of Jamie staring at him.
They measure each other and there is nothing left around them. All that remains is this last battle to be fought, this last melee to fight to finally finish this duel started a long time ago and which could not end.