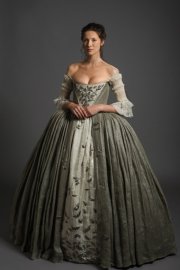 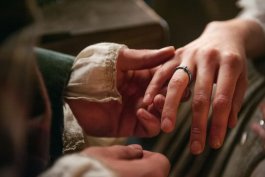 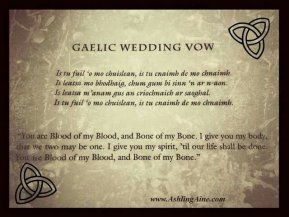 Note that this type of dress is very fashionable at this time (the wedding takes place in 1743, exactly 6 weeks after Claire landed in the eighteenth century, or about the middle of December).

For the little anecdote, Claire's dress was so heavy (she is around 20kg) and the access to the shooting place so steep and slippery, that it was necessary to transport the actress in a cart to the door of the church !

No wedding without a wedding night; six weeks between their meeting and their wedding do not allow our heroes to know each other and they come to share their story. It's a way for the viewer to understand how Jamie is a unique character, born of a love union between two parents that separated everything: Brian Dubh, the selky (or silky), and the sublime Ellen MacKenzie, both victims of a real thunderbolt who led them to flee Leoch Castle and to take refuge in Lallybroch. A singular man, both modern and traditional, who unites with a traveler in time, this announces a union that will not be easy!

Jamie is touching clumsiness, Claire embarrassed, but two very strong objects are worth mentioning: Ellen's pearl necklace that Jamie offers to Claire, and the Fraser clan tartan, in which the two lovers curl up, showing to at the same time, strong attachment to this strong and proud woman and to the clan from which they are henceforth indissociable. Note that Claire will offer the necklace to Brianna before returning to Scotland, a necklace which she herself had given to Mrs. Graham during his reunion with Frank in 1948, and returned by Fiona, the granddaughter of Ms. Graham ...

DIFFERENCES BETWEEN BOOK AND SERIES

They are essentially four in number.

The ring of Claire does not exist in the book of Diana Gabaldon; Jamie passes Claire's finger a ring of Brian Dubh, his father. This ring is way too big and Claire returns it to Jamie at the end of the ceremony. It was only after the episode of spanking, at the moment of their reconciliation that Jamie offered an alliance to Claire: [the package] 'contained a large silver ring, carved from the typical Highland tracery, with a delicate jacobite thistle engraved inside each loop '. This alliance as described here, is the twin sister that Jamie will offer to Claire in Season 4, an alliance made by the faithful Murtagh. It does not look like the ring he puts on his finger in the series, it will keep until it is stolen.

The other difference also concerns one of the conditions; that of the dress. The one Claire wears is lent by a friend of the innkeeper's wife who welcomes them to her establishment; it is thus described: '[...] it was a cream-colored satin dress, with a plunging neckline on which fitted a corselet adorned with a multitude of tiny fabric buttons. The sleeves were richly trimmed with lace, just like the embroidered chocolate velvet skirt. Unlike the series, in which the brothel owner says that 'no woman should marry in another's dress', it is in the dress of a villager whose 'fabric was still impregnated with Smell of his former owner, Claire goes to the altar.

We spoke above about Ellen's tartan and necklace. The episode in which the two lovers embrace in the tartan, which in passing is not blue-gray but crimson does not exist in the book, and the pearls are offered to Claire before the marriage ceremony; a small visual sprain and another temporal!

Finally, the wedding night, in the book, does not last one night but three according to the tradition of the Highlands after Diana Gabaldon. The story of the wedding was therefore condensed in the series, tightening the time to make it stronger emotionally, both for the spectators and for the characters, who pass from feeling to feeling in the space of 24 hours.

A WEDDING ARRANGED BY CONTRACT

We do not marry for love but for interest. The spouses, in the eighteenth century, do not choose each other. We get married for questions of money, title, power, land ... The reason given by Dougal to arrange the marriage between Claire and Jamie is the imperious need for Claire to become Scottish in order to legally escape the power of English.

Wedding allows the young wife to enter a family; the groom gives him his name and clan, giving him the protection he needs. The bride is supposed to be a virgin at the time of the marriage, the groom may not be virgin. Here is the opposite. From the beginning, therefore, we are dealing with an atypical couple and a rather original marriage.

It's actually more complicated than that. This marriage is, first of all, for Dougal, a way to make sure that Claire, for whom he has a big weakness, enters the family, to possibly benefit from it (he does not take too long to make him a proposal in this sense, even during the wedding night, which he will reiterate when he thinks Jamie hangs in Wentworth). On the other hand, and for Dougal always, a way to keep the stranglehold on Lallybroch, the castle and the field allowing access to the Highlands, in case of strategic need if ever a war broke out. For Jamie, falling in love with Claire, although he does not confess to him at that moment, it's getting the object of his desire. For Claire finally, it is a way to overcome the dangers that lie in wait and shelter from the lust of Dougal.

In Protestant England in the eighteenth century, the marriage between Claire and Jamie obeyed Catholic ritual, the dominant religion then in Scotland. If Claire seems to believe neither god nor devil, Jamie is a catholic convinced but not fanatic and wishes a religious marriage. This is the first of three conditions he imposes for this marriage to be made. Dougal and Willy take care to find the place of the ceremony and convince the priest to devote this union in a hurry.

Catholic marriage in the eighteenth century obeys precise rules. The priest must publish the banns and announce the union three times. For lack of time, the banns will not be pronounced, and the priest, under duress, agrees to give up (finally, constraint, rather we should say blackmail ... a quick marriage against windows for his church!). Mass is said in Latin and the wedding ring blessed. Both spouses must mutually swear love, fidelity and support. Marriage is effective only once 'consumed'. Claire and Jamie's ceremony is very similar to the one we still know today, as Diana points out in volume 1: 'The Catholic wedding mass had not changed much in a few centuries and the words that 'were joined to the red-haired man by my side were substantially the same as those who had consecrated my marriage with Frank'.

THE INFLUENCE OF THE SCOTTISH TRADITION IN THE MARRIAGE

OF CLAIRE AND JAMIE

After the Catholic ceremony, Jamie and Claire proceed to the traditional binding of Scottish hands. Dougal cuts their wrist and binds their wounds with a strip of cloth; the spouses then exchange these words:

You are the blood of my blood and the bone of my bone.

I give you my body, so that we two are One.

I give you my Spirit until our life is done.

You can not own me because I belong to myself

But, if we both wish, I give you what is mine

give you the cannon because I am a free person.

But I will serve you the way you need

and the honeycomb will taste sweeter coming from my hand.

Ye are Blood of my Blood, and Bone of my Bone.

I give you my body, that we might be one.

I give ye my Spirit, 'til our Life shall be Done.

You can not have me for I belong to me

But while we both wish it, I give you that which is mine to give

You can command me, for I am a free person

But I need you in those ways you require

and the honeycomb will be coming from my hand.

Second of the three conditions imposed by Jamie: it requires, in the series at least, but we will return later on the differences between series and book, that Claire can have an alliance. He uses his key to Lallybroch, his house (a symbol!), That he makes forge to make an alliance. It is the two faithful friends, Rupert MacKenzie and Angus Mohr, who are in charge of this race. The story of the wedding ring merges with that of the engagement ring. Indeed, the custom of the engagement ring dates back to ancient times. Only the woman wears it, since it symbolizes the deposit of the marriage. From the 11th / 12th centuries, when the engagement and marriage ceremony merge, the symbol of the ring evolves, henceforth signifying promise and pledge of fidelity. It is then of course that the husband, too, wears a ring, which Jamie does not do without the explanation. Claire wears her ring in her right hand, according to medieval usage rather than her left hand, to which she continues to wear Frank's wedding ring.

Third and last condition, Jamie, who wants to 'marry neatly', requires for Claire a wedding dress. Another incongruous will for a man who has nothing else on his back than his own kilt and must borrow his ceremonial dress from an obscure member of his clan. The use that prevails then is wearing his best dress, whatever the color. This request is all the more incongruous because it is in a brothel that lawyer Ned Gowan, charged with this mission, goes.

However, the dress that Claire wears in the series is reminiscent of the dress worn by Princess Anne of England at her wedding in 1734 with the Prince of Orange, a dress that the brothers Goncourt in their History of Women in the eighteenth century, give the following description: 'the day of the wedding celebration, the bride, greatly low-cut, having flies, red and orange blossom, dressed in a silver dress trimmed with mother-of-pearl and brilliants wearing shoes of the same stuff, with rosettes of diamonds, was conducted by two knights of the hand.