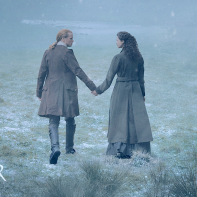 Light in the sixth season

The first viewing left me with a gloomy and dark memory with a lack of light. Reading the various positive comments on the Facebook group, I wanted to take a closer look at why I had this resentment.

So I reviewed the whole season with an analytical eye focused on light. I then realized that contrary to what I had remembered, it is very bright and lively except at certain significant moments that impacted my memory. I then realized that it was the affect that guided my memories. I only retained certain dark atmospheres that touched me and marked my mind. No plan is there by chance or to furnish. Everything makes sense and serves the director's intention.

In the Outlander series, and since the 1st season, the materiality of the light is very neat and emphasizes the process of narration. She is deliberate, narrative, expressive and treated as an additional character with feelings. She accompanies each scene to affirm and tell this fabulous story from Ms. Gabaldon's books.

My analysis of the treatment of light that sublimates the narrative of this Season 6 will be divided into three parts:

- 2 - Make the state of mind of the characters feel.

- 3 - Create emotions in the viewer that results from the addition of the first two.

In each of these parts, the light will be worked in a specific way: Color - Material - Intensity - Contrast - Roundness - Shadow - Heat - Coldness - ...

There are many different situations, here is a classification by emotional themes, after all this is the job of this particular "character". Here are some of them:

- MEMORY: nostalgia, with flashbacks, which inform us about the past life of the characters.

- ENVIRONMENT: details, informs about the context of the story and highlights the atmosphere of the scene with objects and backgrounds behind the characters.

- EXPRESSIVENESS: makes us feel what the characters feel. We have to show it because we are not in their heads.

- HOPE: resilience, joy, happiness, resilience is the DNA of this saga and especially in this season for all the main characters.

The examples presented in three documents are illustrative and not exhaustive.

In the appendix, at the end of this analysis, you will find two articles on the different ways of working with light in the series and particularly that of candles for Season 1 and in Season 6.

— « The Making of Outlander – The official guide to seasons 1&2 par Tara Bennett, introduction by Diana Gabaldon “.

— Alasdair Walker, Director of Photography, and Scott Napier, Chief Electrician, talk about lighting and capturing the world of Outlander. of 9 May 2022.

—Episode 1- Ardsmuir prison. We are in Scotland, the uniform light spreads in an extended and veiled way outside. It is dark and emphasizes inside the materials that show misery for example on clothes or with the humidity of the walls, confinement with close-ups on the details of grids, chains and despair with colors without intensity called desaturated or dull with gray skies, clogged.

— Episode 4 - Wolf Hour: Ian confides in Jamie about his past life with the Mohawks. The colors are all desaturated, without brilliance, with a diffuse light predominantly gray to make us feel the immense sadness that Ian feels. Only intimate moments are shown with a contrast that draws bodies or faces.

— Episode 5 - Bonnie Prince Charles' escape takes place at night, the light is dark with a blue filter that emphasizes the sadness and fear felt by Charles Edouard, Flora MacDonald and the viewer. This moment is dramatic, filled with nostalgia, accentuated by this homogeneous light that is soft with shadows with blurred edges to plunge us into this immense sorrow and mourning that the protagonists and all the Jacobites live.

Memories of Claire in an American fast food restaurant with Brianna. Light is not natural; It is yellow, electric and immediately plunges us into the 1970s with neon lights and Formica tables. The yellow filter gives a supernatural atmosphere where only the objects, the Hamburgers with fries and glasses of Coca-Cola, are clearly visible. This nostalgia for the past will be taken up by Claire when she tells Jamie that a death row inmate in the twentieth century asks for what he wants as a last meal and it is often a dish of his childhood. By associations of ideas, there is a contrast between secure happiness with aggressive bright yellow and happiness in danger with very dark tones just illuminated by the soft warmth of the fireplace. 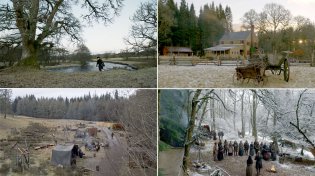 The landscapes are filmed in natural light, neutral and often without particular effect. It is fair, informative and evokes everyday life by showing where the action takes place. Only the intensity of the brightness of the sky changes and gives the emotional atmosphere of the scene. The hues are diluted by the atmosphere and create the perception of depth and space. Lights and colors vary according to

— Episode 1- The arrival of Tom Christie at Fraser's Ridge announces the gloom rendered by a lack of light and gray tones. We find this same dull and sinister atmosphere for prayer and the fishermen's camp. Everything is filmed in shades of grey.

—Episode 6 - The camp of the newcomers remains in the same tone, to transcribe their puritanism.

— Episode 3 - The small cradle floating on the water is illuminated by a strong light contrast. The announced drama is felt by a chiaroscuro luminosity that mixes the sky and water to engulf the baby a little more and plunge the viewer into the terror of the unthinkable. While everything seems serene in this landscape, the perspective of the river embarks the basket in the distance and reinforces the representation of the drama.

— Episode 3 - Ian and Malva meet in the woods with a warm, bright light that accompanies their feelings during an intimate discussion.

— Episodes 2 and 4 - The Indian camp is bright, vivid and very colorful. In contrast to the melancholy felt at the Ridge, a sense of joy and peace emerges in this naturally sunny light.

Cross Creek and the gardens at Jocasta's where the barbecue takes place in honor of Flora MacDonald, the light is neutral and dull, with a gray sky that makes you feel a tension that we see very well between Jamie and Lord John. 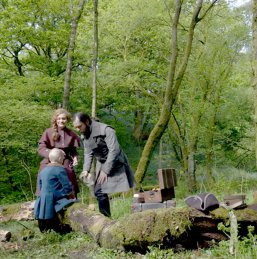 Happiness and hope for Roger, Brianna and Jem who are in a lush forest bathed in natural, bright light. It is the saturation of the colors that makes them feel their joy.

— E8 - Richard Brown's militia takes Jamie and Claire away from Fraser's Ridge and begins a long journey in a dull neutral light, which highlights beautiful landscapes. Their beauty contrasts with what the couple is experiencing, life outside continues as if nothing had happened, while it is slow and uncertain for them. The arrival in Wilmington is depicted with a light all chiaroscuro, harsh and violent underlined by sharp and straight shadows like knife blades that communicate to us the fear, heartbreak and despair felt by Claire at that moment. 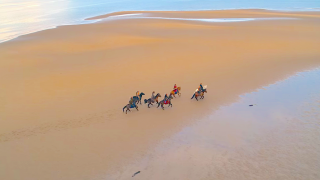 - Jamie, Ian and the Indians ride on the beach to a better future and to Claire.

It is the finale and this warm light that envelops them joyfully carries us with them. 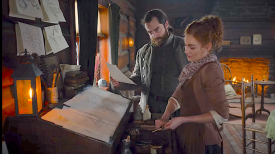 As in a still life painting of the eighteenth century, the various objects filmed in the intimacy of the house are staged with a light that reveals the diversity of textures and volumes that it illuminates.

In the doctor's office, in the common room, the room or the stable, the objects build a limited, dense and rich space. Combined with aesthetic research, their realism shows us the social position of the Fraser family. By creating a special atmosphere, light has a big role in the storytelling process. Its purpose is to make us feel the intentions and emotions of the characters, combining the objects with the colorful atmosphere and the drawings of the shadows on the backgrounds.

Light and objects describe a place and tell:

– The interior of Brianna and Roger's cabin is dark. A warm atmosphere is communicated by the light sources that have warm colors. The objects on the desk are contrasting and inform us about Brianna's engineering activities.

– Marsali's spinning wheel is bright, a beautiful contrast brings out its shapes with a warm color. The pleasure of this beautiful photographic image makes us feel Marsali's happiness to have such a beautiful tool. 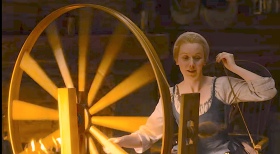 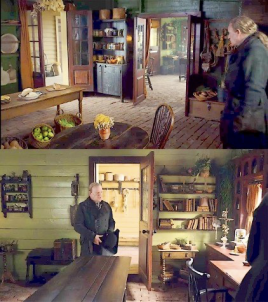 - Inside, the light fixed on the objects gives a rich and precious character to the place, filmed at Tom Christie's eye level. We are in his admiring gaze that will transform and sharpen his jealousy. 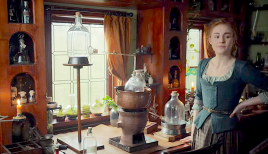 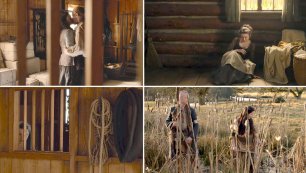 — Episode 3 – Amy McCallum's cabin, the lack of light insists on misery and emptiness and shows us the destitution of this family.

—Episode 4 – The barn is described by the light that brings out the material of the objects: the ropes, the crates, the straps

— Episode 4 – Malva with Ian, the reeds are clear and lively, sharp like Cupid's arrows.

— E4 – Fergus' suicide attempt, the violent contrast of the knife blade in contact with the skin, points our gaze at the blood stain and makes us feel a strong emotion. 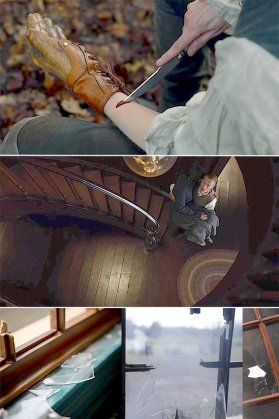 — E8 - The violence of the events is affirmed by a bright and very contrasting light that emphasizes the forms.

For example, the banister of the staircase looks like a sharp arch reminiscent of the blade of a sword.

—E7 - Claire and Jamie prepare the cover, several sources of warm light make each object shine brightly. It is hope and joy that shines through this bright and serene scene. 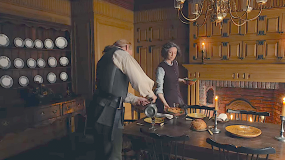 — Episode 8 - The devastated house is in the dark, only scattered objects and shards of glass are lit by the fireplace and filmed low to the ground, at eye level of someone who has fallen.

- In the wagon which is dark, there is a beam of light directed at the plate of food, the fabrics and the rope. It is the only illuminated and colorful part that is there to draw our eye to the mice that quietly eat and defile their only meal.

- In the prison, the confinement is signified by the grilles against the light with a bright and contrasting light on the material and by the brilliance of the wall. 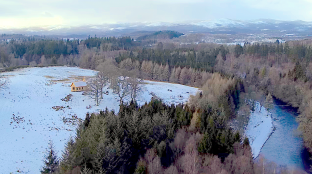 The examples in this first part are not exhaustive. I chose meaningful scenes that use in a representative way, light in the service of the narrative arc.

2 - The state of mind of the characters 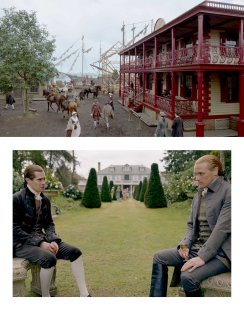