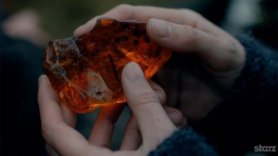 What can be said about Hugh Munro's gift to Claire two days after her wedding with Jamie. What symbolic hides behind this present which is anything but ordinary?
Can we imagine that beyond his sentimental value, there is a real desire to transmit protection or even to influence the meaning of this new life together?

Some beliefs equate the dragonfly with change. It would also remind us that when our deepest thoughts surface, we must pay attention.
It is a lesson we must learn from her that teaches us that what we think is directly proportional to what we see on the surface.
In short, our conscious and unconscious thoughts would be the guiding thread of the meaning we give to our lives.

And finally, because of its short life, the dragonfly teaches us to live our lives to the maximum because it will stop one day. We must be able to look at things positively and see the good things.

When Claire passes on this sentimental gift to Jamie during their separation from the stones of Craigh Na Dun, just before the battle of Culloden, asking her to always keep her on him, she transmits her eternal love, as a feeble compensation to the terrifying absence waiting for them ... And as if to reinforce this feeling, both of them are fervently reciting the sweet words of their marriage: 'You are the blood of my blood, you are the flesh of my flesh ... until the death is separating us '... A death that Jamie believes is imminent.

Many pagan cultures adorn the dragonfly with magical attributes similar to those of the butterfly, including, of course, metamorphosis, change, transformation.
Can we conclude that this dragonfly imprisoned in its amber and abandoned on the lands of Culloden while Jamie dies, establishes the change of the traditions of the Scottish clans as much as the end of this eternal love ...?
There is no question here of asserting, or even implying, that a simple dragonfly, even enclosed in amber, can by its very nature influence the meaning of our lives, but it is interesting to make the link with the spiritual (and pagan) symbolisms of Celtic beliefs.

Moreover, while we are talking about the symbols, why not add the one of attributing to amber the power to calm fears and the feeling of lack? Which, for once, gives Claire's gesture a whole new dimension since she offers it to Jamie just before he goes to fight in Culloden with the firm intention to die there and that he finds himself there immobilized for hours, waiting for death, lying on these plains dripping with the blood of the Scots.
This stone, Jamie drops it to the ground while his friends come to save him. It rolls on the ground without anyone noticing, except we, spectators, panicked at the idea that the love of Claire that it contains is definitely lost. All the symbolic contained in this stone with this dragonfly that it contains will not be. Will no longer be.
And that's what we see afterwards. Jamie is alive, yes, but his soul is drifting away.

When we revisit this stone, it will be alongside Claire, 200 years later, exhibited in a museum retracing the Battle of Culloden. The stone and its dragonfly, forever signing, for Claire and for visitors to the museum, the bloody outcome of this battle and the past reality of this passionate love.

Far from me the idea of ​​doing a contractual analysis, this is just my interpretation hot. I like to see in everything the symbolism that it carries.

And if there was another reason to make me want to debate the thing, I would notice that, beyond the marketing side, this dragonfly in his amber prison has seduced lovers of the series that we are.

I myself have a small dragonfly pierced in my flesh (which dates from before my passion for outlander) offered by my love.
This is the link that I own, beyond the series, a very strong symbolism and in line with my philosophy of life.